What's On Your Workdesk Wednesday - Week 331

There's a lot of sneezing and coughing going on in the Worthington household at the moment but I'm determined to join in with WOYWW today, no matter what! I can't believe that, apart from turning up late last week, I haven't participated for five weeks ... shocking!!! So without further delay, here's my desk this week: 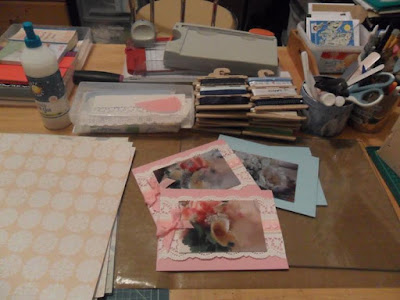 Yep ... it didn't stay clear for long! True the stuff along the back remains as it was last week after the grand tidy up, as is the tin of tools centre right, but there's been quite a lot more added to the working area. I can't seem to help myself because there's two WIPs out at the same time. Most obviously a partially completed set of cards, WIP #1, using print outs of photos taken of the Monday's vase - so pretty I couldn't resist using them as card toppers. That's a box of ready-made punched paper trims ... unearthed during the stash unpack ... next to the bottle of PVA glue. The patterned paper and the ribbon holders are part of  WIP #2 - this ribbon storage: 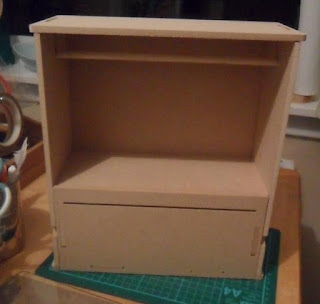 I plan to decorate it with the pretty patterned paper once the adhesive has set - after I've worked out the best way to go about it. 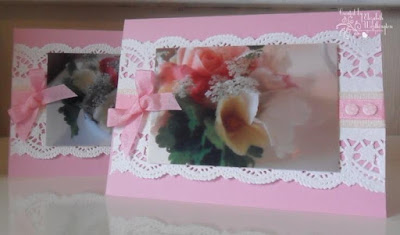 A closer shot of the cards. The punched trims were bought way back in the days when I first started to make cards and before I discovered border punches. Long past time they were used up!

Right, off to blow my nose, yet again, dose myself up with cold/flu remedy and drink a soothing cup of soup, then I'll be back to do some desk hopping - can't wait to see what your desks look like this week. In the meantime, I wish you a very good week.

Hope you are soon better Elizabeth. Pretty cards and look forward to seeing what you do with the ribbon storage . Anne x #16

Hi Elizabeth. It's good to see you've been having fun in the new creative room but I'm so sorry to hear you're not feeling well. Hope you manage to shake the bugs off very soon. Take care my friend.
Hugs,
Annie x #6

This nasty cold seems to be hitting quite a few people - must get my flu shot!
Such pretty cards, and from your own arrangements too. Looking forward to seeing your decorated box - bet it is something special when your fingers work their magic.
Hugs, Neet 5 xx

Such pretty cards Elizabeth - they will be treasured I think. Hope the cold gets better quickly. x Jo

there seem to be lots of very early season colds around! hope you are better soon. love your desk! Helen #1

Get well soon! So sorry that you are not feeling well. Sometimes I don't join in, but five weeks, beats me! So welcome back! You will have to show us your ribbon storage after it is finished and full! :) #50

Your cards are beautiful and those gorgeous photos are perfect as card toppers. I love the addition of the lace/doily background - it sets the flowers off perfectly. Thanks so much for stopping by my desk earlier, I hope you have a great week,
Diana #25

Hi Elizabeth! You've only missed five weeks; I feel like I've missed five months!!! I'm hoping to get back on track next week.

Your cards look very pretty. Is that a photo that you took?

Hi Elizabeth, I too am coughing and lying in bed which is why I have time to visit! Otherwise I'd be making some shibori!!! nice job on the cards! Patsy

Hello Elizabeth, nice to see you back and thank you for the lovely comments regarding the pansies/violas. Can't wait to see how you decorate the lovely paper and ribbon holder..... that looks like it will be a very useful piece for your craft room.
sandra de @55