I've made my first card of the year! I'm quite chuffed with myself for getting down to a bit of crafting at last :) Once you've seen it you will think this was a quick and easy card to make! Not so, it took me the better part of a day to make?!?!  I've never been the fastest of crafters but that's just plain ridiculous!!!!

Over at CHNC Challenge 212 Hazel is asking that we upcycle, recycle, re-purpose or use something free so I've recycled a card received this Christmas. I liked this cute image of hedgehogs in a car spilling over with gifts, especially as it is decidedly glittery. 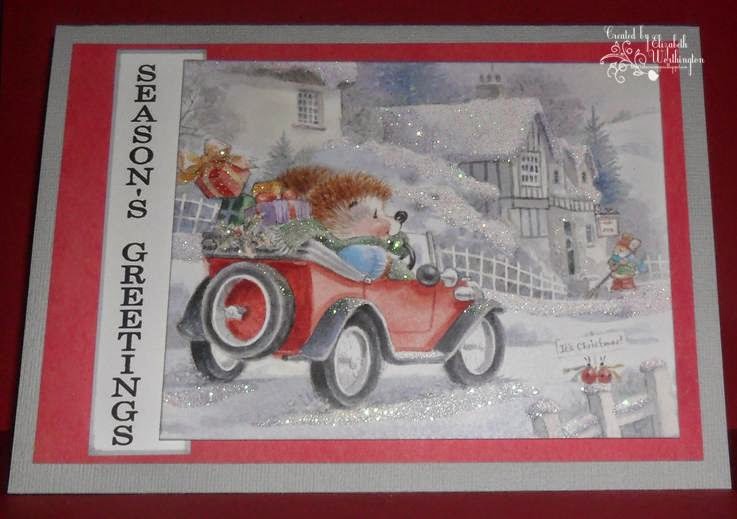 To make it I did the following:

- first I folded an A4 sheet of Papermania textured cardstock in a light grey shade to create an A5 tent shape card base.

- the greeting was computer generated and printed on to white cardstock, trimmed and edged with a grey Promarker - Ice Grey 1 - to create faux matting.

- the inside is decorated with a leftover strip of the red and an image trimmed from the insert too. 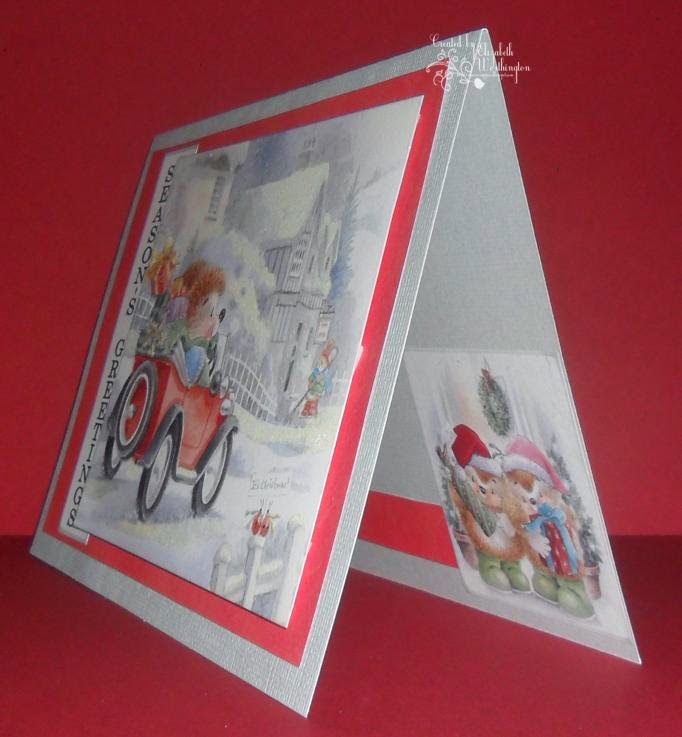 You'll notice that it's a fairly flat card. I've set a target to make as many embellishment light cards as possible after almost mortgaging my soul to Royal Mail to send out our 2014 Christmas cards. I'll be saving the pretty ribbons, charms and gems for cards that will be delivered by hand. Unless, of course, RM drops the cost of postage ... no, I don't think that's very likely either!

I'm off now to concentrate on finishing some scrap layouts started about two months ago. That's another target for this year - create more scrap layouts. It's not as though I don't have plenty of pretty patterned paper just crying out to be used.

Hope you are all having a good week so far. Many thanks to everyone who takes the time to visit and maybe leave a comment ... all very much appreciated.

Gorgeous card Elizabeth. And although I am not a slow crafter it sometimes takes me 5 to 6 hours to finish a card. Sometimes longer if I work with lots of layers that are all handmade so ...
But your card was well worth the time .
Love, veerle

Beautiful winter scenery. Wonderfully colorized and decorated with glitter. All of this interacts together beautifully. Glitter from the tires looks like a cloud of snow raised up in the air. Revelation.
Regards,
Bozena

Good to see you are crafting at last Elizabeth, and this is a beautiful 'first of the year' card :o)
Jackie xx

Fantastic bit of recycling Elizabeth love, love that image and the wonderful colours a super make, thank you for sharing it with us at CHNC Extra Challenge
hugs
lorraine x

l love your recycled card Elizabeth the image is just the cutes ever!!xx

Elizabeth, Hope you are feeling much,much better now. Of course I love the hedgies and what a cute image this was. Recycled so wonderfully well with that pretty layout you selected. I'm a slow card maker too, so I can identify with your taking longer than you expected - but it was worth it. Your card turned out so nicely. I am always aghast when I receive cards from Europe and see the postage cost. The USA postage is pricey too - especially if the envelope is non-standard, or there are any raised embellies or layers. But I don't think it's as expensive as the RM. Take care, TFS & Hugs

What a wonderful way to use those beautiful cards that we receive. I know what you mean about postage. The cost will be going up for us in the States once again starting in a few months. I had to rethink my Christmas cards this year and went for a flat card also.
Hope your 2015 is filled with wonderful crafting and beautiful gardening too.
Blessings,
Bobbie Lynn

Great image...so worth it to upcycle this adorable image.

Like you, i need to make my posted cards flatter this year. I hand deliver as many as possible and those are fun to dress up with the depth...for the rest it is flat city!!!

That is a cute image, definitely worth putting the effort into upcycling it. I'm a big believer in keeping things flat -- I admire of the fancy embellished cards on people's blogs but can't imagine trying to mail them.

Good job on keeping the card flat and saving on the postal costs! I hate it when simple cards take all day to make. Sometimes they do that though. Love all the glitter. I'm sure seeing lots of recycled Christmas cards these days. I may have to jump into the fray.

I have a wee pile of Xmas cards we were given that I am going to do the same with Elizabeth. Thankfully Miss Pixie told me about a postage ruler last year and I got one from Ebay in early January. Apart from three cards all of Christmas cards went cheap rate and I intend to carry on doing that - the postage prices are ludicrous and I've heard they'll get worse too, very clever snippeting Karen x

That card deserved to be upcycled & your efforts were totally worth it, Elizabeth! I'm working on flatter Christmas cards, too. That postage is a killer!