In A Vase On Monday - Berries in a Little Brown Vase

Afternoon to you all again,

Twice in one day! It's a very long time since I joined in Cathy's In A Vase on Monday meme. I'm so glad to be able to join in again though there's not a lot to be had in our very wet garden ... we've had a lot of heavy rain and storms over the last few weeks. 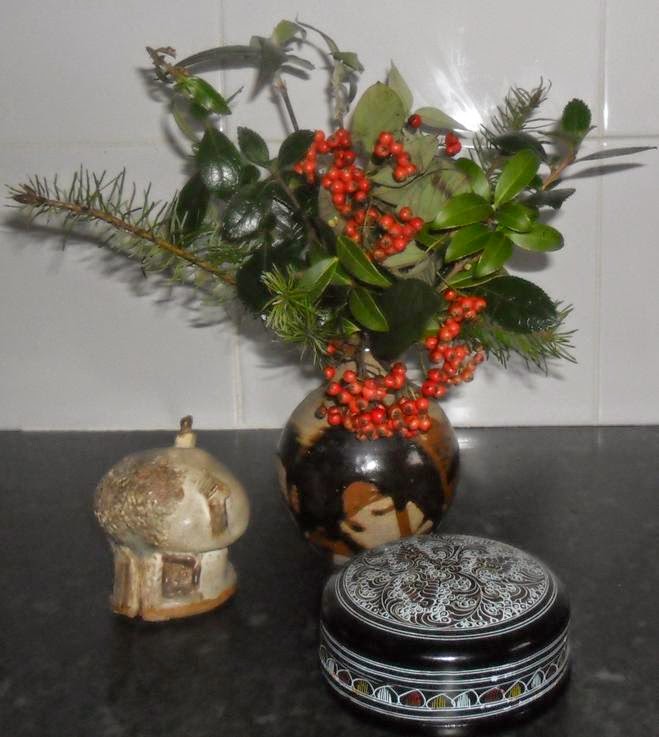 After yesterday's trip out - mentioned in the preceding post - I took the opportunity to nip out into the back garden to do a bit of foraging in the shrubbery. There are no flowers to be seen, not even a snowdrop, but plenty of greenery and a few clusters of berries. I started with the cotoneaster berries for some colour then added some twigs from one of the glossy leaved escallonias. There wasn't enough out back so a tour round the front garden was called for. 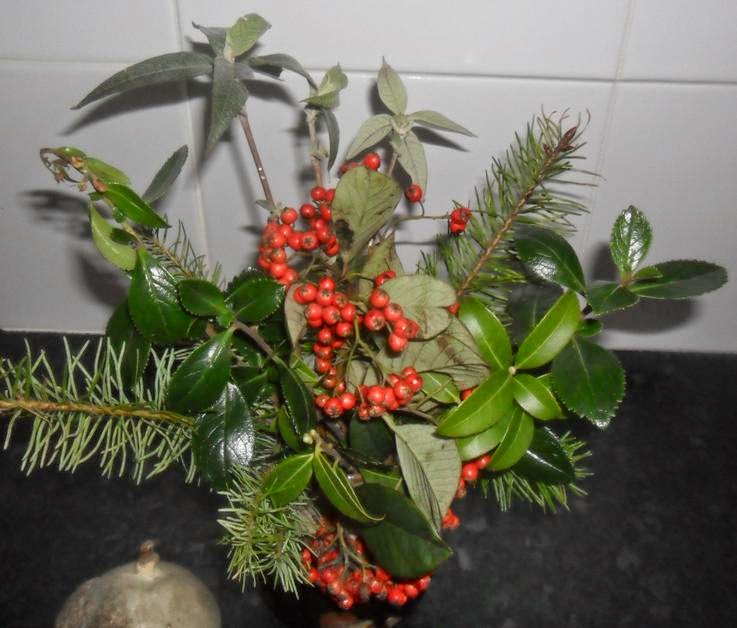 There I found the buddleia was just coming in to leaf, so much I'm sure it won't miss the three little bits I pinched. The sarcococca  in a pot by the front door is just coming into bud so I snipped from that too - maybe the tiny wee buds will open in the warmth indoors. Finally, we have a couple of little fir trees that are always happy to oblige me. I think they may have started out a good many years ago as Christmas trees which were planted out after the festivities were over - now they grow one on either side of the driveway gate and look just perfect there. 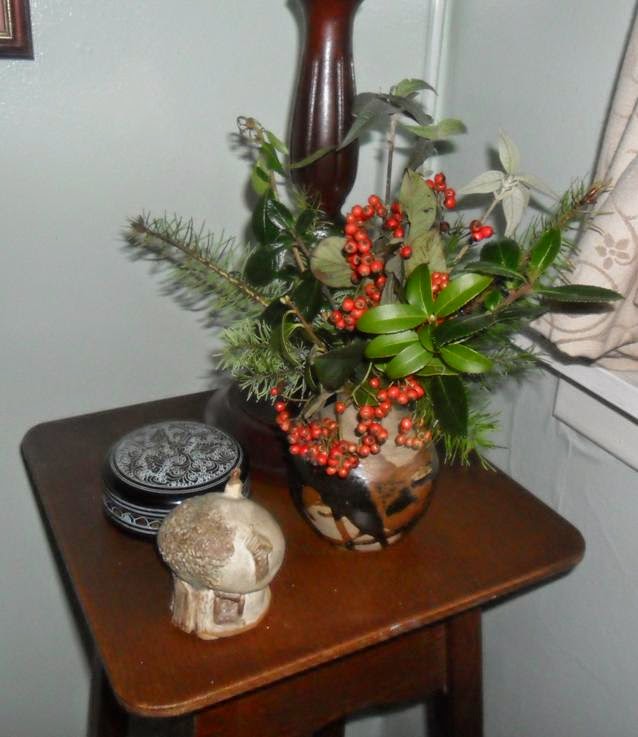 The first two photos were taken in the kitchen against the white tiling because that room is the brightest at this time of the year but the last is a shot of where the vase is now. I've had this little brown vase for many years but this is the first time it's been used! It's usually tucked away in a corner cupboard as is the much treasured little pottery mushroom house - my son made it at school when he was a teenager. The black laquered box, another treasure, contains a set of matching coasters ... a gift from a Japanese professor when he visited the university department where I worked for a number of years.

I did hope to find one plant in flower on my trip around the back garden but sadly I was to be very disappointed. I was looking for the white hellebore I moved from a pot to the woodland area at he bottom of the garden. 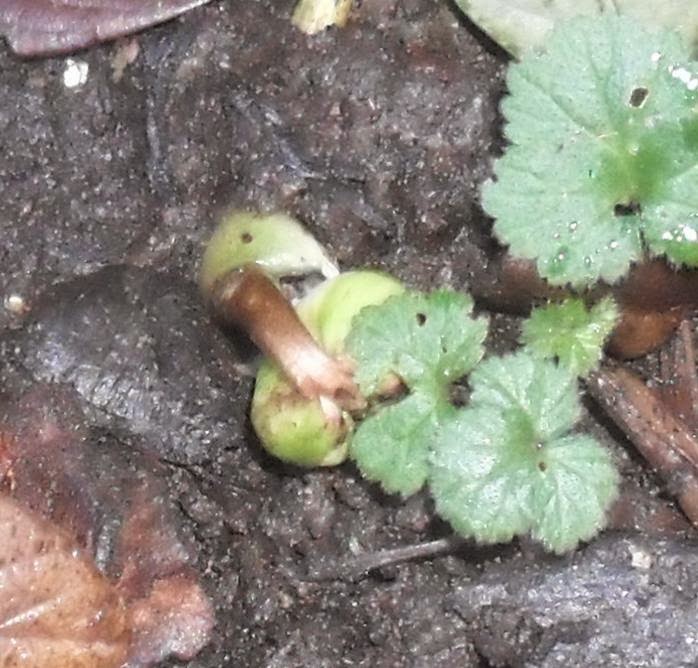 It looked very promising on Christmas Day when I took this photo - some nice fat buds were popping through then - but yesterday it looked even smaller and very unpromising. I'm now regretting taking it out of the tub where it was so obviously well settled and happy.

I seem to have hit this week running - two posts in one day - will I be able to keep it up I wonder. If I do, I hope to catch up with all the others who enjoy putting a vase together for Mondays over the next day or two.

Hi Elizabeth, Your vase with the arrangements look gorgeous l do like to see some greenery it looks so lovely x

That's a lovely collection if foliage and berries, Elizabeth - it always surprises me how well an apparently motley collection of material works together. It's good to see the different textures and shades of green, and the berries add an almopst luxurious touch. Thanks for sharing this and the lovely vase it is in - and your son's mushroom house! ps hope your hellebore picks up!

What a beautiful collection you managed to find in your garden today, even without flowers. I love joining in with Cathy's meme because it has made me look at my garden in a new way. Hopefully your hellebore will oblige and flower for you soon.

Elizabeth your weather is wet and ours is cold and snowy. Luckily I had some indoor garden blooms as I did not want to dig through the snow as it was feeling like zero out. I love the variety of greenery in your vase with those lovely berries....perfect for your vase. It is fun to find vases we have never used. They seem happier when we use them.

I think your berries and greens complement the vase better than the hellebore might have but I hope the latter rebounds to join another vase in the future. Best wishes Elizabeth!

What a lovely arrangement with those bright red berries against the green glossy leaves. Don't know the names you listed, but the berries look like what I know as Bittersweet. The arrangement is beautiful in the tablescape and that vase is perfect to display them. TFS & Hope the weather is not awful in your area. TFS

Just shows how you don't need to have flowers to make a colourful display, this looks very pretty. I love your batch of cards, very classy looking :o)
Jackie xx

You may not have many flowers today but you sure know how to display what you have. Those berries look gorgeous and I just love that mushroom house.
Hugs
xx