Faith is the Bird

I trust you have all had a good day and that you have accomplished all you have set out to do. After spending much of yesterday away from home, I've been catching up today - mostly tidying up my messy craft desk and dealing with all the scraps left over from all the birthday cards I found myself making recently. In fact, I've given myself a challenge to use them all up rather than add them to the snippet box ... I could be some time :)

The card I have to share with you this evening is one made several days ago for the UKPC swap. I know it has been received so it's now okay to let you see it. 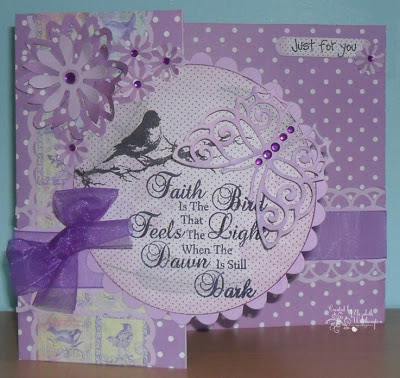 My swap partner's favourite colour is lilac so, naturally, that's the colour I chose. The design is based on this sketch - taken from Cardmaking and Papercraft March 2011: 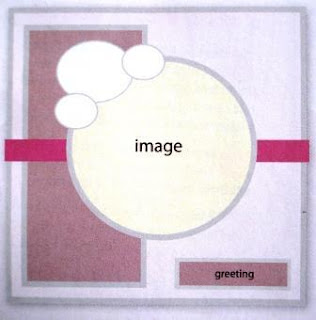 As you can see, I decided not to make a flat card this time but to use a ready made shaped card which already had the circle cut out. The topper was cut out of patterned paper that had a very tiny green polka dot on a white background. It was then sponged with a lavender ink before layering stamping on top using bubble-wrap, the string board - previously described in this post - feathers, bird on branch and sentiment. That sentiment has been languishing in my stamp collection for many months just waiting for the right occasion, that came with the choice of bird patterned paper ... birds became the theme. 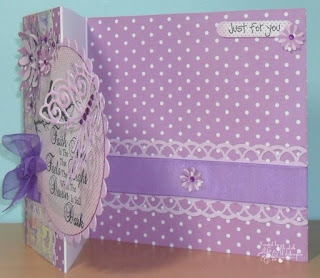 The flower embellishments were made from snippets using a large daisy punch and several smaller ones - all shaped and layered together and a gem added to the centre of each before adhering them to the card. I have my friend Cassidy to thank for the beautiful filigree butterfly.

Because of those snippets I'm off to the playground to visit Di over at the Pixie's Crafty Snippets Playground - Week 73  - where the challenge is always to use snippets in whatever project made.

Materials:
That's about it for me for now. I'm off to watch the final part of Scott & Bailey with the EM but I'll be back later for an hour or so when I hope to do a bit of blog hopping before bedtime.

Just in case I don't see you later, I'll bid you a good night :)

Oh Elizabeth, I adore this card. So many pretty elements and a lovely design. The sentiment is just perfect - and so true as well.

What a stunning creation in beautiful lavender colors! Every detail is amazing! Beautiful card!

Elizabeth, its simply beautiful, I love the stamps and over stamping, very delicate, love it, xx

What a wonderful sentiment, Elizabeth! And that lovely lavender is so feminine!

What a beautiful card and such a pretty colour :o)
Jackie xx

What a great shaped card .. .. and gorgeous snippets too.

Pleased I am not the only one that needs a crafty tidy up.

Have to say I am only putting things away .. .. no re-organisation .. .. I just need to reclaim some work space before I run out! LOL!!!

Sorry the ribbon and cord were misbehaving for you the other day .. .. perhaps next time it will do what you want!!!

Hope you have a good weekend.

so gorgeous Elizabeth.stunning card shape and colours and I love the sweet bird :D

What a beautiful card. I'm sure your swap partner loved it!!!

What a fabulous way to use up scraps...that filigree butterfly is fabulous and love the bird and that perfect sentiment!