Winter Scenes - some recycled cards for a challenge

Well, I've gone from not making much to making three cards in one afternoon! 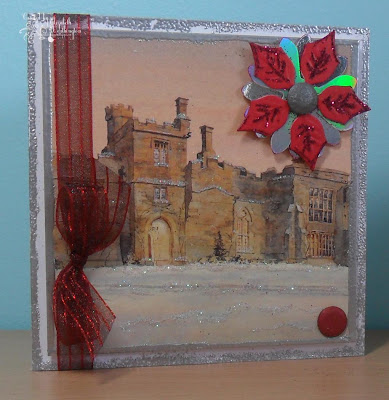 Hazel over at Crafty Hazelnut's Christmas Challenge wanted to see cards that feature buildings. I've been sorting through all my stuff and when a couple of winter landscape cards, received a good few years ago came to light, I thought recycled they would fit the bill perfectly.

The first one features one of my favourite buildings, the medieval Haddon Hall, Bakewell, Derbyshire. When we lived in the High Peak District we visited the Hall often because I loved it so much. It's been described as the most romantic house to survive the middle ages and I can't argue with that. In summer the garden is just the most special place to be and has been judged Garden of the Year by the Historic Houses Association. It has been a favourite location for film-makers, having featured in Jane Eyre (several versions), Elizabeth, Pride & Prejudice and The Other Boleyn Girl. However, back when it was first built, it must have been quite cut-off in winter and perhaps a little grim. Here in this illustration it simply looks beautiful. 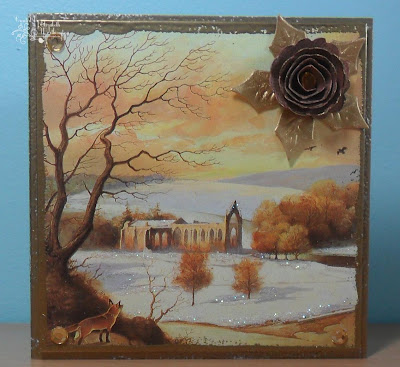 The second is of a ruined abbey entitled Winter's Landscape by Bob Hersey. I thought you might like to read the quotation that was on the back of the original card.

As light snow creates unusual reliefs around the ruined abbey, two animal predators are abroad. In the foreground, a russet-backed fox sniffs the cold air for scent: above, a passing kestrel attracts a mob of crows.

Sorry, you can just about see the kestrel just under the flower embellishment.

To make the cards I trimmed the cards down to fit the base cards, just leaving a margin all the way round, and then edged the base cards with metallic embossing powder. The toppers are attached using foam dimension squares and there's a smattering of iridescent glitter added too. All my industry at the Cuttlebug this week paid off as I was able to make up the flower embellishments from a mix of punched and die-cut snippets. Ribbon - from the newly discovered craft emporium, Cardwell Craft Centre - card candi and gems  used for the finishing touches - all from stash.

When I trimmed down the Winter's Landscape I was left with a tiny piece that was too nice to toss so I made the tiny thank you card with it - waste not, want not :) 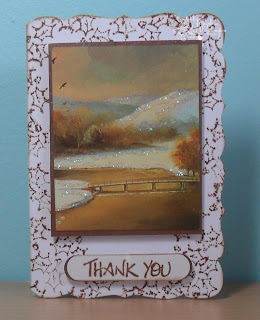 I stamped all round the edge with distress ink, Vintage Photo, and a small holly stamp from Inkandinkado's Holiday set. This time the topper is matted to a snippet of bronze pearlescent card, as is the greeting - a very useful wood-mounted from Crafty Stamps. More iridescent glitter to add to the winter feel. It should have been a quick and easy card, not much to it, but when I was stamping round the edge I forgot to protect the back so ... 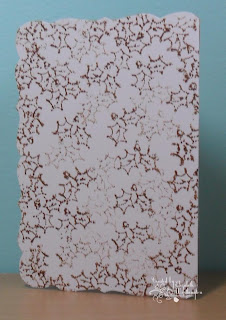 ... a lot of stamping of the same holly spray to cover up the mess!

As I'm actually on time this week the first two cards are for the following:

Hazel's CHNC Challenge # 86 - include a building

Pixie's Crafty Snippet Challenge #34  - that's Di's playground - because they all include a variety of snippets in one form or another.

There's a lot of movement and preparation going on downstairs today. The EM is preparing to don his painter's overalls to give the lounge a fresh coat of paint on Monday ... groan and sigh, groan and sigh ... I just know it's going to cause endless disruption to the smooth running of the household, not to mention the nasty fumes from the paint - plays havoc with my asthma  :(  Am I alone in just hating all the attendant fuss painting a few walls seems to entail even whilst acknowledging that it has to be done. The EM has told me to bite the bullet - it will be over in no time at all!!!

Wishing you all a lovely weekend - it's a Bank Holiday here in the UK and it looks like rain ... typical!

Elizabeth these cards are gorgeous - all of them. Hope you find your die. By the way on your Workdesk on Wednesday you had a lovely die sitting beside your Cuttlebug on the from left hand side - which label was it - I loved the shape of it.

You have put your own personal touch on these recycled cards and made something new and beautiful with them. Well done. Kate x

Hi Eliazabeth, So beautiful and so realastic looking after using the iridescent glitter spray which l bought today not used it before but your effects is totally stunning! the scenes are stunning xx

What beautiful recycled cards Elizabeth. I intend to do just that for ones that need posting this year as postage increases has made it that way. Enjoy your Week-End, and I'm sure the decorating will be over soon. Hugs Rita xx

These cards are just stunning, simple yet so effective and emotive.

Fabulous job you have done with these cards Elizabeth, Hugs May x x x

Super bit of recycling going on here. Love the second card the best. Hugs Mrs A.

Saw these cards earlier and forgot to comment - silly me. We did a recycled SWAP some time ago and these cards show just what you can do with old cards. Super Job - must think about doing some myself too. I usually take my Cuttlebug/Nesties to my old Christmas cards and make toppers to be used at some point. I probably have a box "pending" somewhere. Oh look at that it is Roudolf Day now could look at it today. BJ

I love these recycled (or is it upcycled?) cards Elizabeth.

Glad you found your lost die (saw post above this one first).

Wonderful recycled cards Elizabeth but I think you're showing off a bit by doing THREE in one go!!! I can't make one thing in a day let alone three in one session. So impressed.
Juliaxx

I promise you - getting someone in ain't fun either - better the devil you know really :)