Well, Whats on Your Workdesk Wednesday is almost over and here's me just turning up for the party.
Casa Worthington has been a house of illness this week ... the EM came down with a nasty case of dizziness at the weekend and he was so poorly by Monday I had to call in the doc. He has vertigo caused by some vicious virus that came along after his recent attack of flu.  He's still not good today and, to make matters worse, I've had another attack of leg pain last night which has laid me low too. The new medication has not been the answer and I've now been referred to a specialist. But enough of that! There's not a lot going on my desk but there is this: 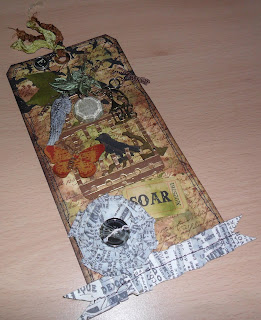 Yes, it's a Hels Sheridan tag - how lucky am I to be the one drawn in Frankie's TH Birdcage swap - celebrating her 300 posts on 7th September. I'm really chuffed to receive this stunning tag which now has pride of place in the craft space. Difficult to see in this photo - you can click to enlarge - but Hels has even included a button with my initial on it - how fab is that :) You can read how Hels made the tag here

I'd show you the photos of the one I made for the swap but it has gone of to Wyoming and as I haven't heard from DeeDee yet, I'm assuming she hasn't received it yet. Hopefully, she will have it by next Wednesday so I will reveal all then.

Edited Note: Since posting this I've had an email from DeeDee telling me to reveal all.  She says she won't peek until after the tag has been delivered ... I'm not sure I wouldn't be tempted but I've posted it here for anyone who wants to see what it looks like :) 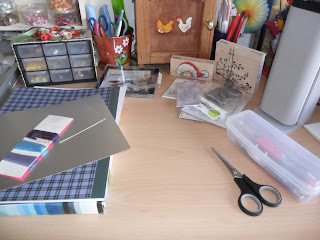 And here's what else is on my desk. I've just finished a card - it can be seen in the previous post here . So what you can see on the left is some card and tartan patterned paper which I may use on the next card - for an uncle's 80th birthday - I haven't decided yet; the drawer set I finally got round to prettifying recently - post here; a mix of stamps that I've either just finished using on a project or plan to use soon including a couple of gorgeous new Penny Black's; a box of what I refer to as the sharps - i.e. pokey tools and cutting knifes - the safest place to keep them; and the last item is my favourite scissors.

That's my desk this week - now I'm off to do a bit of desk spotting, hoping to spot the lesser-spotted floor crafter amongst the tables, desks, dining-rooms and sofas that are all linked up to Julia's blog, Stamping Ground  - if you've never been over there, you don't know what you're missing :)

Happy crafting to you all,

I looked for you on the list but I must be blind ...so sorry to here that you and your hubby have not been well ...I so hope they sort your leg out ...its not phlebitis is it?

lucky lucky! what a beautiful tag :) love your neat space!

Oh I hope you and your DH starting feeling much better real soon. Such a wonderful prize, it's always fun winning goodies. I see a cute little Penny Black kitty, looking forward to that creation. Thanks for the peek into your creative space.

That is a gorgeous tag you received! I hope that you and your hubby are feeling better soon. All the best!

Hope you're feeling better soon! What a great tag you received - lucky lady!

Ay ay vertigo is grim, and now your poor leg - doctor induced by the wrong tablets...I'm sorry to hear that you're both so low. As you know, I have a tag (!!),but can't show you mine wither - I didn't photo it before I sent it to Neil. Although I will of course, show the one I was sent!

Oh bless Elizabeth - both you and your DH in the wars, not fun! Hope things soon look up and that you manage to get to Bolton Abbey OK. If not, some other time! Take care, get well hugs - Di xx (We had your yummy meat loaf again last night! Tip top as always!)

Congrats on winning the gorgeous tag from Hels. Sorry to hear you are unwell hope your health settles.

Oh whole-hearted commiserations there Elizabeth - thanks for popping over and do pray that Hubby and your dear self are soon in the recovering books and well mended by next week... I am off to have my left hoof checked too as it is not getting better perhaps worse me-thinks!!love Shaz in oz.x

Here hoping it a better week healthwise for you and i cant wait to see the stamp top right with fencing and shrubbery on it. It looks right up my street.
Happy Crafting Sharne

Sorry to hear you've both been under the weather Elizabeth. I always blame Autumn, it seems to bring with it illnesses, don't know why. We've been a poorly house too but only with nasty head colds and they seem to be disappearing now thank goodness.
Your tag is just gorgeous and the card you made in your last post is stunning. The colours are so soft and mellow.
Happy WOYWW
Hugs Lisax

Well, you have a very tide desk this week Elizabeth considering you’ve just finished a card….I wish mine looked like that whenever I finished one. Lol!
I love your tag…….how lucky are you to have won such a stunning piece of work but the best thing I’ve seen on your desk is that cute PB stamp with the puddy cat on. I think I may have to look out for that one at Ally Pally when I go on the 25th of this month.
Happy Crafting!
Sue
x

Hello there and sorry to read that you and your DH are poorly and hope you are soon feeling better. The tag is wonderful ou are so lucky to have won it. Your desl looks a lot better than mine did earlier this evening- I had been making one ared but it looked as though I'd made hundreds lol. Thankyou for visiting my desk, sorry I am so late in getting to yours. Anne x

Between you and hubby, I can understand your concern and message this week. Hope you get better soon. Your desk is well loved and I see a C-word stamp there, too.

You lucky girl to get a Hels tag!!!! Hope you are feeling better soon.

Sorry to hear that you and your husband are feeling under the weather, I hope you are both feeling better soon. Your worktop is nice and tidy is that usual or is it because you have been too ill to make a mess I wonder? Take care xx

Congrats! You won a gorgeous tag!
Hope you both are feeling better soon!
xx

Wishing you a get well soon, gorgeous tag

Sorry I am so late getting by this week but I wanted to pop by and visit your blog to say hello and to see what you are up to! Didn't have the time to post(except about newest Doswell addition) or craft the past two weeks due to being in Virginia visiting with the son's family to see the newest granddaughter born. Definitely a fun time none the less. Hope you have a great week. Vickie aka okienurse

Lovely tag but what a shame there has been so much illness in the family. Hope by now you are feeling much better and things are returning back to normal for you both.
Thanks for sharing and thanks for commenting on my blog. Hugs Neet x