No Longer MIA ... and here's the Frankie's Swap Birdcage Tag

Well, the vicious virus has been banished, the dizziness the EM was suffering from seems to have abated, and he is looking, and behaving, more like his usual self. Unfortunately, the same can't be said for me ... the pains persist but I've decided that enough is enough and time I showed a few items that were done last week but not blogged. As there are a few projects, I'll just show you the swap tag, organised by Frankie, of DragonsWeb, to celebrate her 300th post, in this post ... otherwise it would be a very, very long post - as opposed to a long post!! The swap recipient, DeeDee, has given me permission to show the tag even though she has not received it - she lives in the US - so here it is. 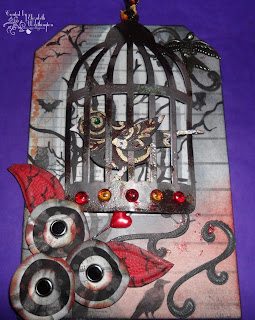 I didn't have a tag in my stash - if I want to make a tag I usually cut it out from an old template - this time I cut a piece of white card to the size and shape (as instructed by Frankie), together with a piece of the design paper from Pink Paislee Twilight Collection, spooky paper with a tree, bats, owls and ravens/crows depicted, that was for the front, and another piece of black Coredinations for the back.

After adhering the DP to the front, I brushed distress inks, Fired Brick first, then Black Soot around the edges. I turned the birdcage die over and used it as a mask, brushing Black Soot over it - not sure you can see the effect but here's a close up that might help: 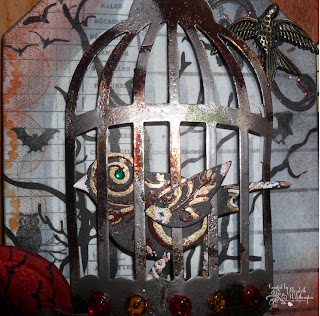 I also stamped yet more birds, Lavinia's  Birds in Flight, on the top corners. The birdcage was already cut out  in gold mirri card, far too new and shiny looking, so had to be aged with a mix of distress ink (Aged Mahogany), embossing powder (Silver) and Perfect Pearls (Forever Green). To get the rounded shape it was wrapped round a jam jar with an elastic band and left overnight ... worked a treat. Rainbow drops in shades of amber and red decorate the bottom. The bird, and its wing, were covered in Black Soot DI and stamped with VersaMark and a flourish stamp from Papermania's Summer Bloom set  - particularly good for decorating the head - and embossed in a combination of Crimson Red & Seafoam White embossing powder, after which I picked out some areas with gilding flakes using a Zig pen as the adhesive.  The final touch is the green gem for the eye.  I then attached the cage slightly to the right of the mask and in such a way that the hole at the top of the cage overhung the top so that it could be threaded with the fibre. 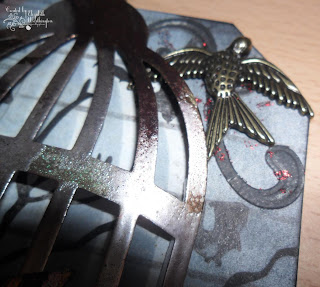 The metal swallow is a car boot sale find - originally a brooch, I just removed the clasp before gluing it to the tag. 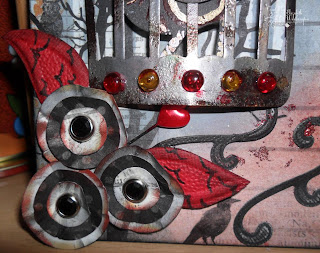 The flowers are made from punched circles, crumpled and inked with the red and black DIs and fixed with black gem brads. The leaves were cut from a piece of red flower embossed paper - a gift from a friend - inked with black DI and stamped with the birds in flight stamp. The flourishes are cut from the black Coredinations and the pin with the red heart-shaped head is from my stash ... I knew it would come in useful one day :) 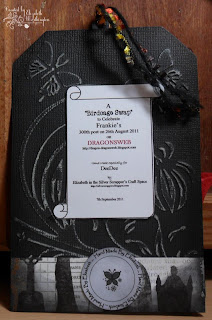 The black Coredinations was embossed with Craft Concept's Flutterby folder and then rubbed down to reveal the grey core.  The bottom edge is trimmed with a piece of the Twilight paper showing gravestones ... very ghoulish looking. The scroll is computer generated.

Just another angle to look at - you can see the fibre better in this photo. I hope DeeDee likes the tag when the postie eventually delivers it - I tried to make something that I thought would appeal to her taste - I hope I've succeeded. She promised she would not peek at the link - I'm not sure how she will resist - I certainly couldn't :) 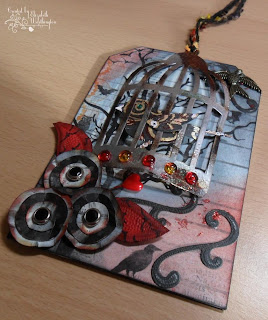 All the materials for the tag came from my offcuts and snippets boxes so I'll be submitting it to Jules Crafty Snippet Challenge  - Week 37 -  this week. It could qualify as the strangest snippet make she has ever seen.

Well, that took a lot longer to write up then I thought it would so I'm off to lie down for a while. I've a couple of birthday cards to post, and a little prize I've received to show you probably tomorrow now.

I hope you are all enjoying your weekend, whatever the weather wherever you are, and finding plenty of time to craft.

wow Elizabeth that is one awesome birdcage tag so impressed, at first wondered why on earth I would want to have that die(dont own it seems am one of the few) but really love yours and the colours simply make it! Shaz in oz.x

Oh wow wow I really love how you have made your swap to be halloweeny, spooky, I never thought to use the birdcage as this, I've always thought of it as cutie, mmmmm me thinks I might be using this for halloween makes. Kezzy x

What a stunning and different tag, it's unusual but gorgeous. I love all you little details, and the birdcage is firstclass.

Absolutely stunning tag Elizabeth, very creepy and scary looking! Hope you see the back of the yukky virus soon.

That tag is stunning ...love the use of the broach ...and it is all from snippets??? ...perfect for a froogle Scot. lol xx

Well it is definitely one of the most beautiful!!! I love what you have done here .. .. very ingenius and very stunning!!

I love everything about it - especially the birdcage itself. You have made it look like real metal. What a clever playmate you are!!

Thank you for keeping me company in the snippet playground this week with your brilliant make.

Gorgeous effect using the black and red.
Super idea to bend the birdie cage round a jam jar. Would never have thought of that. Hugs Mrs A.