What's On Your Workdesk Wednesday - Week 535

Another Wednesday, another WOYWW, and, as isn't unusual, my desk is a mess. 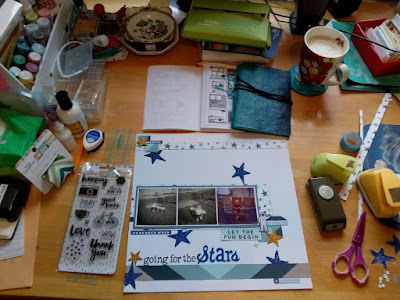 As you can see, I'm in full scrapping mode and working on one of the last pages for the album I've made for my son. So there punches and stamps, etc., together with scraps of paper - all the stuff used to make the page. Immediately behind is the book of sketches open at the one I used as a basis for the page - I find it sometimes helps to have something as a starting point. On top of that is the notebook I'm using to jot stuff in this month - it's Shimelle's  Learn Something New September again and I do try to keep up each year, and each year I fail miserably - but I try. Everything else, except the lovely latte, is just the muddle of stuff I can't help gathering round me. Oh, and there's a couple of new goodies too. 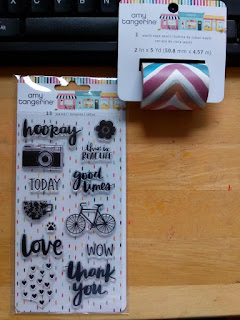 Both the stamp set and washi tape are from American Craft's Amy Tangerine collection. I'm not sure how I'm going to use the extra wide washi but I'm sure I'll think of something. The stamps are more for scrapbooking than cardmaking  but very useful all the same.

And now the book bit. I've abandoned Kazua Ishiguro for now. It's not his fault, I'm just not in the mood for him right now. Instead I've been listening to a dramatised version of this novel, originally written in Swedish and translated into English by Rachel Wilson-Broyles.

A Nearly Normal Family by the Swedish writer, M T Edvardsson, is a psychological thriller and a thoroughly entertaining and satisfying read. The three main characters are read by Richard Armitage (the father), Georgia Maguire (the mother) and Emily Watson (the daughter). There are three sides to the story and the truth will shatter this family to pieces. The father believes his daughter has been framed, the mother believes she is hiding something, the daughter believes they have no idea what she's truly capable of. The story looks at what parents would do if their child was suspected of murder and how far they would you go to protect them. Very thought provoking. 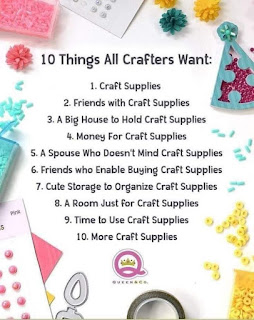 I really liked this one ... I'm sure it sums up perfectly what we all want.

That's it for this WOYWW. Until next week, I wish you all a wonderfully crafty week.

Hi Elizabeth, like the funny, saw that on FB a while ago! Stamp set looks great for scrapping with. Have a lovely week, Hugs, Shaz #4 X

Great desk. Doesn't look messy to me but maybe that's me !! Helen #1

A lovely layout and that book sounds interesting - I'll look it up! Happy WOYWW! zsuzsa #18

Love the LO and new goodies. I will look forward to seeing what you use the washi tape for.
The and finally is brilliant....not seen it before but I'm sure it applies to us all.
Hugs,
Annie x #9
ps see you soon :-)

Gosh, I very nearly ordered that stamp set yesterday, I logicalised myself out of it, but only because I had already over spent! Ive just finished a Normal Family on audio, will be interested to hear what you think. Look at you nearly finishing a whole scrapbook, that’s marvellous. I like a jumping off point for a LO too, they never seem to resemble sketch or instruction but that’ll do!!

Those are fab LOs of your son, you don't look old enough to have a 50 year old child!! Seriously! I always used to read right to the end of every book when I was younger but actually I resent the time now, so if a book doesn't float my boat, I move on....it's quite freeing! I'm reading a series of detective fiction set in Northumberland, the DCI Ryan books by LJ Ross - they're nothing earth shattering but I know the locations so well after living up there for 13 years, so am enjoying that very much!. Worth a read.
Hugs LLJ 6 xxx

That looks like a great stamp set for scrapping. I can see it getting lots of use. Lovely page for your son, how close are you now to finishing?
Love your "finally", I read through it twice and nodded at each one. Could not pick out a favourite, they are all number ones to me.
Hugs, Neet 7 xx

Hi Elizabeth, loving the new layout. Great stamp set too. The craft list certainly works for me Lol! Have a lovely woyww and a happy creative week, Angela x11x

So far your page looks great! I'm not much of a scrapbooker so I love seeing other's pages.
Fun stamps and interesting washi. I use a lot of washi holding dies to cardstock before running through my cutter.
I love mysteries and this book sounds quite intersting.
Great quote!
Have a wonderful week!
Carol N #22

I did smile at that list Elizabeth. I like the layout, white space always appeals to me. Happy belated WOYWW. Sarah #2

I laughed so hard reading the 10 thing... I agree 100% that is what I want! Must forward that to my crafty friends. Love your layout.
Amy Tangerine products always put a smile on my face. Enjoy your crafting!
Belinda #23

Great LOs and the funny is perfect isn't it. Have fun when you meet up with little sis - hope the weather is kind to you. xx Jo