In A Vase On Monday - September Blooms

It's been a while since I've joined in with Cathy's In A Vase On Monday, mostly due to it being the rainy season here - one of the joys of living on the west coast of Scotland. It's raining now. Luckily, I had the rare foresight to gather a bunch of flowers yesterday - for once a dry day. 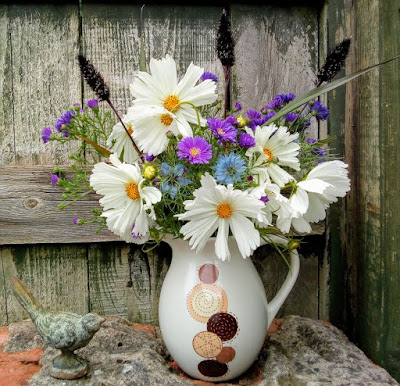 The white cosmos, 'Cupcakes' has finally come into it's own, flowering freely and looking as though it's really enjoying the spot in the border chosen for it. I'm delighted with how well they are doing because they were grown from seed this year - always an unpredictable venture. 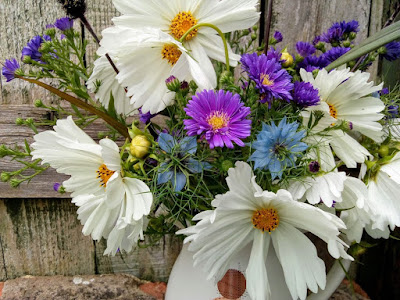 We had a very scruffy hedge growing in the wrong place - suckers were encroaching on the new border so it had to go. That left a considerable bare patch at the back of the border which will have to be planted up in the future but, in the short term, I've just filled with a mix of annuals. These are only now coming into flower giving us some late season colour. The love-in-the-mist, nigella, is doing particularly well. The purple/blue miniature aster, novae-angliae, variety long forgotten, has been growing in the herb garden for several years now - I've long forgotten why I planted it there but it does seem happy so I have no plans to move it. 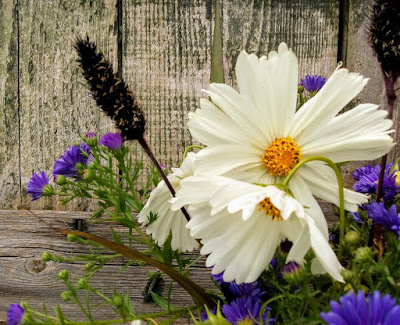 During a visit to a local garden centre recently I discovered, in the reduced section, millet, Pennisetum glaucum 'Purple Majesty'. The fluffy flower spears really caught my eye. I believe this plant is grown as an annual but I'm going to try to overwinter it in the greenhouse. Failing that, in spring, I'll attempt to grow it from seed.

Linking this post to Cathy's meme, In A Vase On Monday, on Rambling in the Garden and joining with many others who share whatever they have found to put in a vase this week. If you have filled a vase today, I'm sure you would be very welcome to join in too.

Those are so pretty, the blues and whites are fresh and lovely. So glad you still have things to collect in spite of the changing season.

What a beautiful vase of flowers Elizabeth. Your garden is such an interesting place to see and even I have started to take an interest in my own small garden. hope you are both well. I Thoroughly enjoyed my time in Inverness with Kate and Alistair. Hugs Rita xxxx

I have found my cosmos has put on a late spurt too. It is good to see yours with other late flowerers - the dwarf aster sounds as if it might be good do-er and I think I shall look out for it. Hope the rain dries up soon for you!

The cool blues make the white cosmos sparkle, Elizabeth. You're the second person to surprise me with nigella - that's a spring bloom in my part of the world.

What a gorgeous display Elizabeth, I love the white cosmos, so beautiful. Your arrangement and colours are fabulous, Kate x