What's On Your Workdesk Wednesday - Week 501

And happy WOYWW to you - I hope you are enjoying your day. 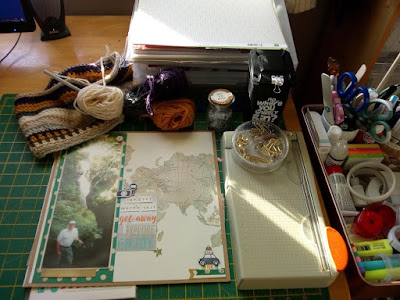 I have to admit that I've staged my desk this week - well, it was boringly empty and tidy and you don't really come here to see that, now do you? There's the usual box and pile of scrapbook papers at the back and a there's a glimpse of the trolley of goodness - the reason the desk's so tidy. And, of course, there's a guillotine - one of two and the one most often used. The added items - a scrap layout, a crochet project and a wee collection of recently acquired stash from the pound shop - the mini wheelie bin and the paperclips should be useful. The crochet is a cowl made from a kit brought back from Wales last year - almost done. 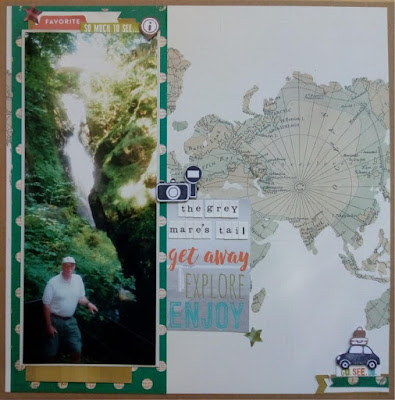 The extra long photo was awkward to scrap. I used a couple of stamps from a newish set of stamps called, I think, De Viaje by Anita y su mundo - stamped in black and cut out - added to the embellishment clusters. The papers are ancient - almost as ancient as me!

And because it's fresh in my mind here's a shot of the spectacular dawn we experienced this morning.

Some of you might have seen it already on Facebook but for those that haven't here it is - amazing!

Finally, the book bit. Only one book this week. 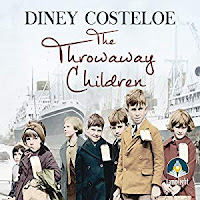 The Throwaway Children by Diney Costeloe. It's about children who were put into a children's home and then sent to Australia. I chose this book because it's a subject close to my heart. My father, together with his five siblings, was put into a children's home in Edinburgh when his mother left them and their father couldn't cope alone. Although he wasn't sent to Australia, he was sent to be fostered on a farm far away in the north of Scotland which, for city children, was just as traumatic. I'm only part way through but so far it's been a box of tissues job! It's devastating how children were treated in the early part of the 20th century. I can only hope things are better today.

Take care and have a happy crafty week.

Hi Elizabeth, love those guillotines. I have an X-Cut one, which is identical to the Tonic one, so I reckon X-Cut must be a Tonic brand. Had it years, and it still cuts like a dream. Also have a smaller one on my desk.Lovely layout, and thats a fab sunrise pic. Have a lovely week, Hugs, Shaz #7 X

A date with the EM? How exciting. Hope you have a lovely time.
Hugs,
Annie x #12

I love that LO, everything is great, the photo, map, little camera....brilliant!
Hugs LLJ 5 xx

That scrapbook page is great and I love the idea of a 'trolley of goodness'! Happy WOYWW, thanks for sharing. Love and God Bless, Caro x (#27)

Hi Elizabeth, sounds like an interesting book. A staged desk is fine by me, mine is pretty boring today but we're here at that's the main thing as see it. Have a great woyww and a happy creative week, Angela x10x

That books sounds good. I'll have to see if our local library has it. Have a great week and thanks for the book suggestion. Dorlene #30

wow, that sky is gorgeous! we had a touch of pink but nothing so spectacular. I staged too, but had new stuff to stage it with! hope to have something "proper" next time round! Helen #2

Hi Elizabeth, I’ve seen a documentary about the children sent to Australia, horrendous, it doesn’t bear thinking about what they went through and how they were treated.
A great photo, what a beautiful sky! I also love your scrap page, my DIL made a book for us of all the photos of our last trip to see them so no need for me to do them, she’s so thoughtful.
Happy Wednesday, have a great week
Jan no23

What an amazing sky Elizabeth. There's always a bargain to be found in the pound shop. Look forward to seeing what becomes of those age old papers, we all have them.
Happy woyww Tracey #8

I like how you dealt with the awkwardly sized photo Elizabeth. The book sounds revealing. Did you see the Christmas episode of Call the Midwife? It dealt with the same theme. Happy WOYWW. Sarah #3

I love the tall photo and you really got the balance on that layout... great job! Happy New Year, happy woyww and a hug from Holland, Marit #20