In A Vase on Monday - September Miscellany

I know, I know, it's not Monday, it's Tuesday but, even though I was away yesterday and home late, I still felt I had to join in with the weekly meme of Cathy, at Rambling in the Garden - In a Vase on Monday. 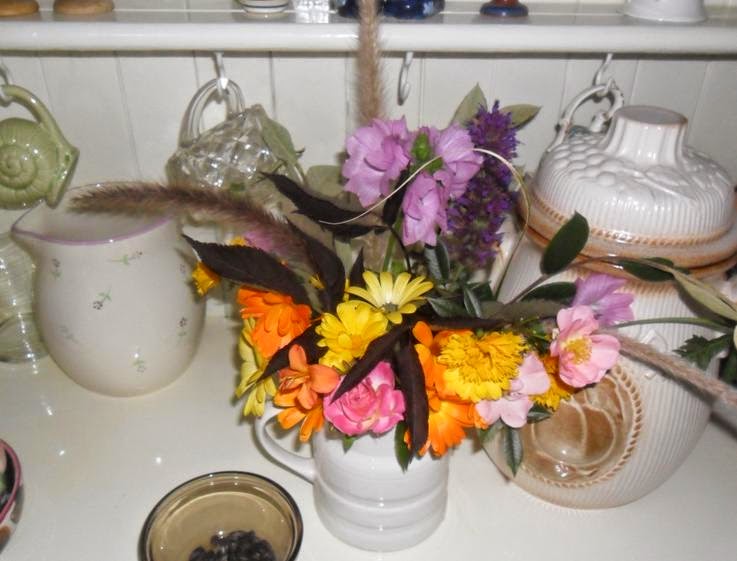 Strolling round the garden this morning, trying to decide what to cut for today, it occurred to me that I should just include a mix that totally reflects what the borders look like in late summer  - a September miscellany. It will be interesting to look back on the post in September next year and compare. 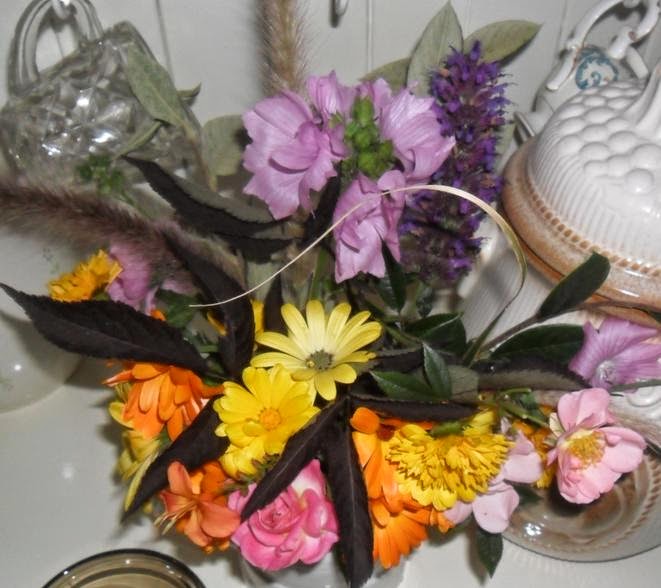 The first flowers picked were from the long border. Coreopsis 'Early Sunrise', a semi-double flower which is doing well after being attacked by slugs when very young and one stem of the peach flowered Crocosmia 'Okavango' found at the Ayr Flower Show a couple of weeks ago.

The light pink rose, to the right, came labelled as 'Dorothy Perkins' however I'm not sure that's correct as Ms Perkins is described as having clusters of pink double flowers - we have clusters, yes, but the flowers don't look the same as illustrated on the label ... another mystery, and this garden has many.
Agastache 'Blue Boa', also discovered at the flower show - the stunning deep violet blue flowers just sung to me on sight!; the deep pink patio rosa 'Carefree Days' at the front - after a brief rest this rose is now covered in blooms again; and few stems of mock mallow, malva moschata.
From the rose bed, a late flowering osteospermum 'Serenity Lemonade' proved to be too tempting - I'm not sure how well these flowers do in a vase but I'm about to find out. The pot marigolds, calendula mixed 'art shades', are from the herb patch.
For foliage I've chosen some sprigs of a massive and clearly long established Cotoneaster, research suggests that it could be Cotoneaster franchetii but I'm not sure - it's more than 9' high, was smothered in clusters of white blossom which is now a mass of berries, green ripening to red; a piece of Sambucus 'Black Beauty' for the dark chocolate coloured leaves. And finally, the seed heads from two fountain grasses, Pennisetum setaceum, 'Sky Rocket' and 'Rubrum'. The 'Rubrum' is another plant spotted at the flower show. It was in a gold medal winning display and I found myself unable to resist stroking those fluffy bottlebrush flowers - so tactile! I was so disappointed to find it sold out, but I left my name and contact details in the hope that there was a forgotten plant hiding back at the nursery. Luck was with me and Brian, the nursery owner, took pity and let me have one of his gold medal winning plants ... which is why I was away yesterday ... we drove over to the nursery to pick the plant up and, at the same time, have a personal guided tour round Brian's fabulous garden :) 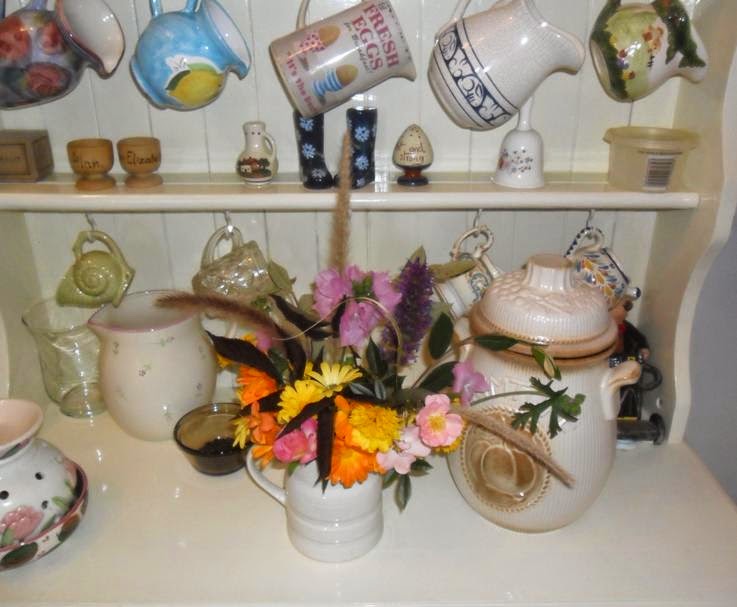 The vase is in fact an old white cream jug inherited from my mother and here it is on the Welsh dresser which is in our hall ... I thought the flowers would be a cheering sight for anyone entering our home. It's where most of my jug collection is kept together with few other bits and bobs, as you can see. 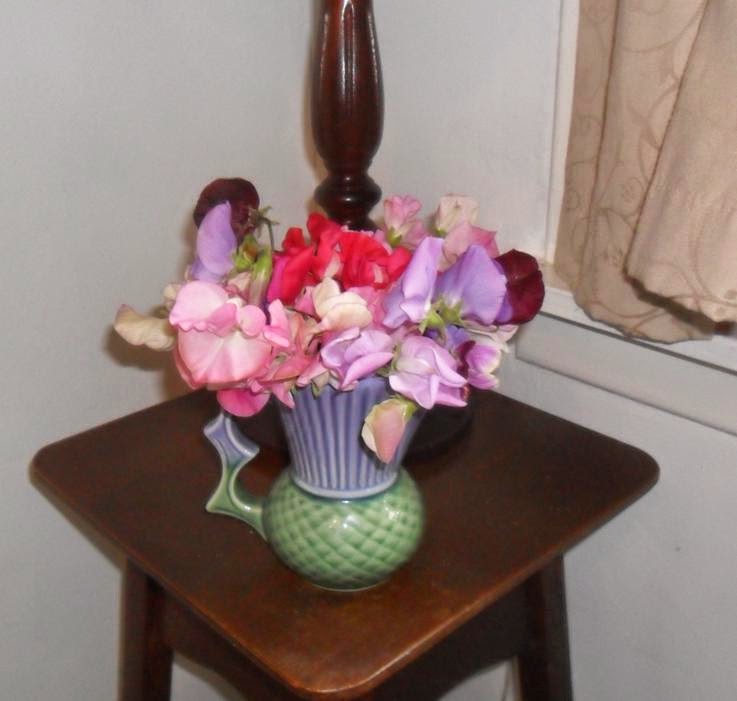 The hall is also where I've put this jug of sweet peas ... we've had a great show despite thinking we'd possibly planted them in the wrong place. In fact, we've had so many we've been giving bunches away just to keep them from going to seed.

Again, it's thanks to Cathy for hosting this meme. As I said last week I'm now enjoying picking more flowers to bring indoors and enjoy. So much so, I'm now planning to create a cutting patch at the bottom of the garden so that, hopefully, I will have no shortage of flowers to pick next year.

We will all have cutting patches soon at this rate - and the bottom will fall out of the cut flower industry!! It has been intriguing to see the collection of flowers you have put in your vase Elizabeth as I have only visited your blog for vase posts so don't know what your garden looks like (and you may not feature it anyway) - you have some lovely things! It's funny about the P Rubrum as I had just put it on my wish list yesterday! I like that agastache too. I too think that the rose is probably not Dorthy P, as that's one I considered and I am sure it is more pink than this. Glad you are enjoying the meme!

How very lovely your arrangement is! I have so enjoyed visiting different blogs from Cathy's meme In a Vase on Monday! It will probably take me all week to get through everyone's! So glad to have found your blog. Dana

Elizabeth your vases are stunning. I really adore the sweet peas and isn't it fun to stroll in the garden picking and choosing which flowers we want to bring in to adore...you chose a beautiful combo!

Peach Crocosmia - how wonderful! The arrangement as a whole radiates cheer.

You always have the loveliest cut flower arrangements. This one is a delight. I have not seen the peach crocosmia...it looks wonderful...

Very pretty and colourful displays Elizabeth, I especially love the first one for it's variety :o)
Jackie xx