In A Vase On Monday - Mallows and Lollipops

It's almost the end of September, normally the time of year when most flowers have gone over and the garden is beginning to look less colourful, but not this year. 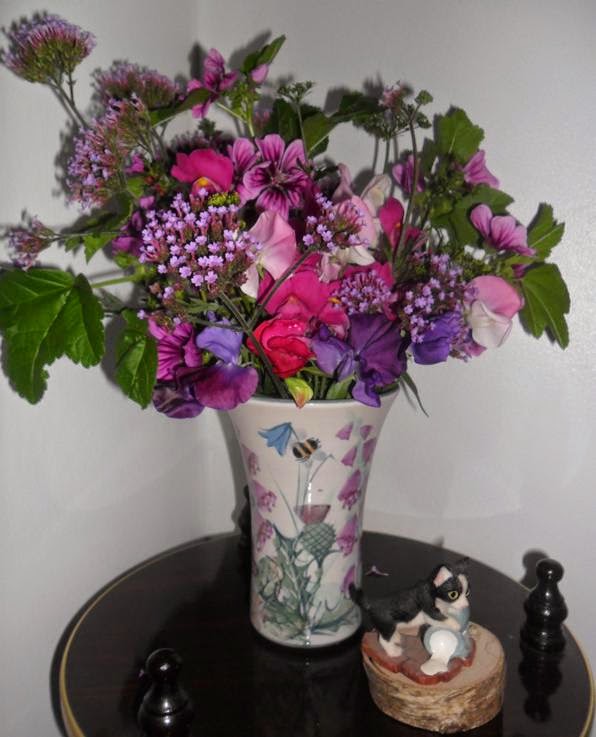 Instead, I was completely spoiled for choice for today's vase. There is so much still in flower that I had to be very selective. The roses and the pinks are busily on their third flush ... so tempting. They look so good I decided to leave them where they are for now ... just a beautiful reminder that summer is not quite over yet.

However, I have had my eye on the mallows - malva sylvestris 'Mystic Merlin' - for some time, thinking I should maybe pick them while they are still looking good. Grown from seed, they have been good doers though they can be a bit unruly at times and, on occasion, have had to have the chop to stop them flopping all over paths and lawn. Despite this drastic treatment they very good naturedly recover quickly and continue to flower their socks off.
Looking round for more flowers in pink/purple shades to add to the mallows I spotted the verbena bonariensis 'Lollipop' in the round bed. It's coming to the end of it's flowering but there was still a few stems just right for cutting. The last few sprigs of lithrum, 'Robin', some deep pink antirrihums and a cutting of mixed sweet peas helped fill out the vase. The flowers of moss curled parsley, petroselinum crispum, it's been left to bolt a bit, provided an extra touch of greenery to the vase. 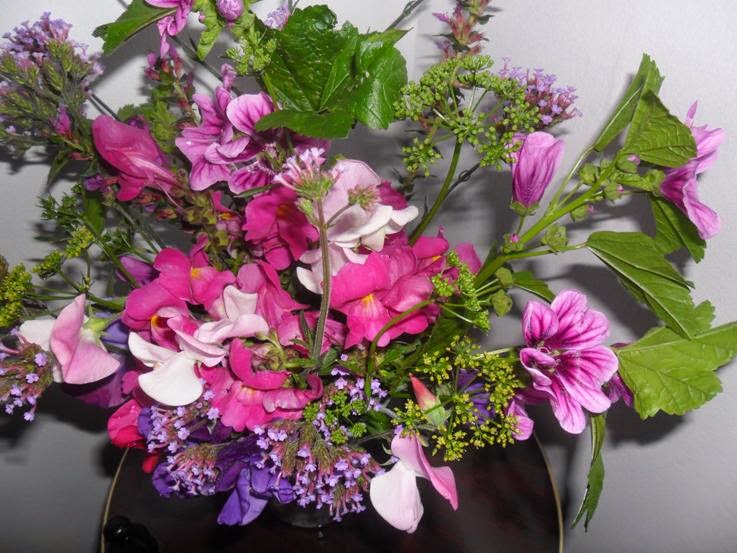 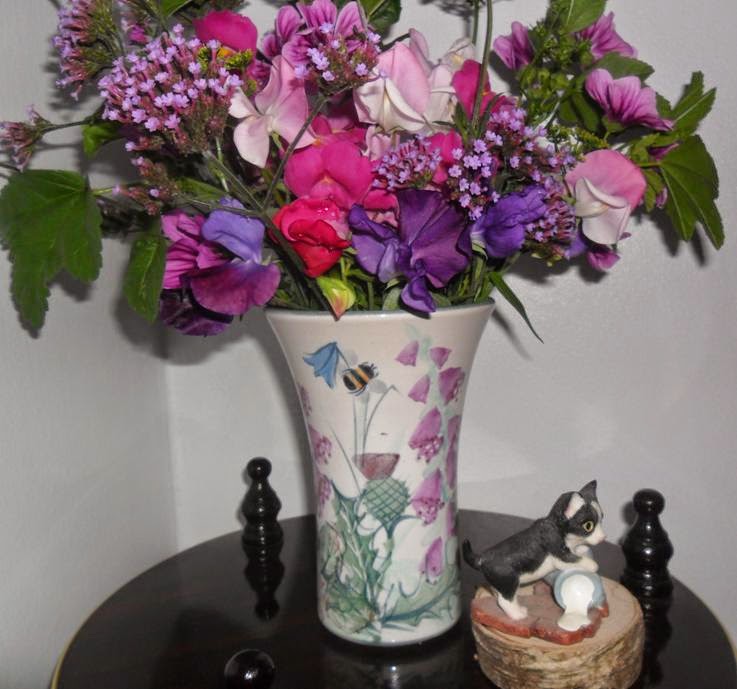 This Tain Pottery vase made the perfect container for my very pink and purple bunch of flowers. Another of my charity shop discoveries! I love the very Scottish design depicting wildflowers native to Scotland ... foxgloves, thistles, and harebells. The surprise is the wee bee just by a harebell.

I hope you have had a lovely day and that tomorrow will be wonderful too.

Hello Elizabeth! Such a lovely arrangement - the colors certainly fool me about the season we are in! So springlike - simply lovely! - Elizabeth

Bolted parsley - what a brilliant addition! And I love the Tain pottery vase - something to look out for. I love your mixture of odds and ends today, Elizabeth - don't they all go well with with each other? I had to smile when I saw your malva - yesterday afternoon I spotted the first flowers on some I had grown from seed so perhaps next week in a vase for me?

I do love your 'in a vase' posts,the pretty flowers would brighten up anyon'es day :o)
Jackie xx

ah Elizabeth thats a good challenge .. now have plenty to share too lovely to have your garden inside isn't it!! I love it thanks for the details as these are flowers I dont know!:D Shaz in Oz.x PS thanks for popping over.

My Elizabeth I couldn't take my eyes off your arrangement and then that vase is gorgeous. I can see that summer isn't over where you are...sadly it is here.

Elizabeth that's a beautiful bunch of flowers seems they have lasted longer than the norm! so nice to see colour at this time of the year xx

Lovely rich shades of colour Elizabeth, perfect for the vase you chose.

You DO have a lot going on in your garden! I can't get over the fact that you still have sweet peas in bloom - mine fried in our all too early May heatwaves and are long gone. You've reminded me too that I must try growing Malva here one day.