I can't believe I've been absent from Julia's WOYWW  for so long, four weeks in fact!!! For those that don't know, that's What's On Your Workdesk Wednesday, the biggest and most enjoyable weekly blog hop there is.  With Casa Worthington having been not much more than a sick bay for most of the past month there's not been much to show on the workdesk but this week has seen some action so here is what it looked like this morning. 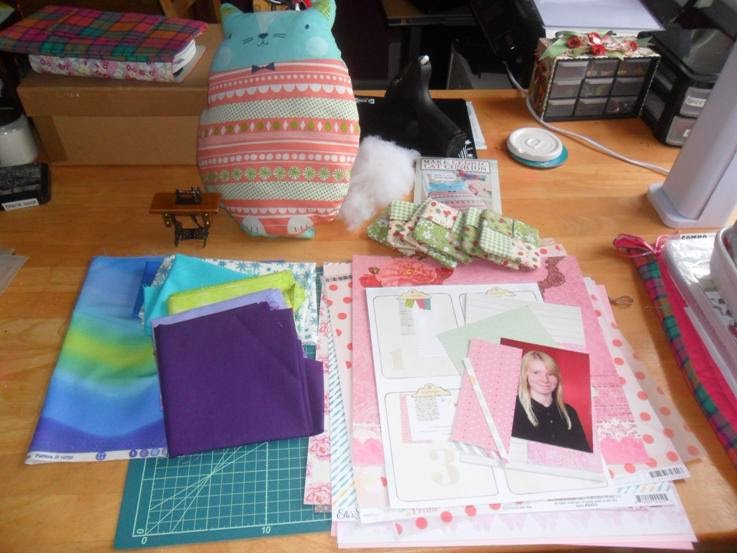 Admittedly the layout of the photo of my granddaughter is a UFO from all those weeks ago but I have high hopes of working on it and maybe even getting it completed some time soon. Beside it is my attempt to pick out scraps of fabric to compliment the colours in that gorgeous Moda fabric on the left. I'm not sure what I'm going to make with them ... the old grey matter is working on it but it could be some time in the planning phase. Way at the back, to the right, is the latest crafty acquisition, a cordless glue gun ... I can see that being so much more handier than the plug in one which, in any case, has now found it's way into the man cave. To the front of this you can see some patchwork coasters my clever daughter made for me for Mother's day. And that is Cedric Cat in the middle, an easy cut out and sew gift that came with Homemaker Magazine. 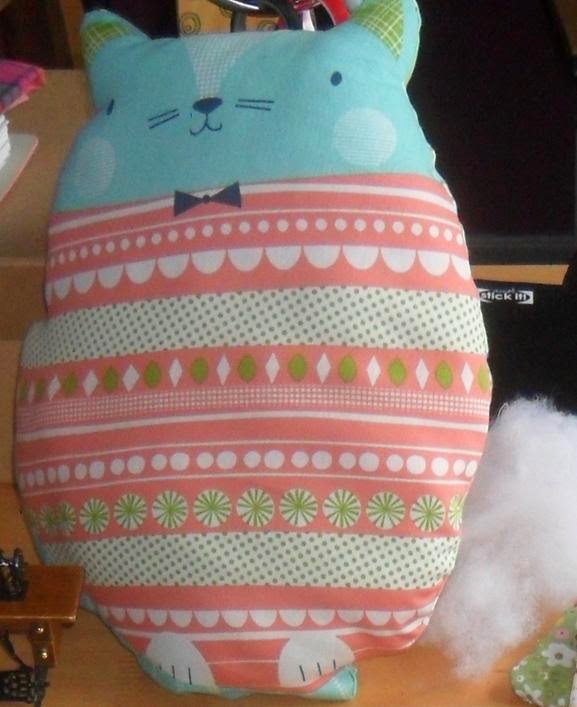 He still needs more stuffing before his tail can be sewn up ... I think one of my grands will love him. 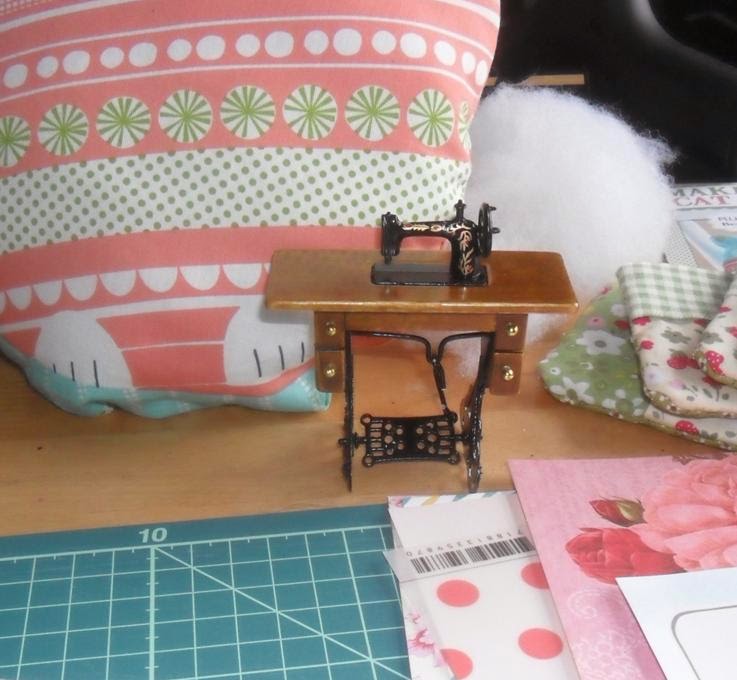 Next to him is my latest acquisition ... a miniature Singer treadle sewing machine for the planned sewing corner in the doll's house. Talking of the sewing corner, the real thing has had a couple of new shelves added for storing all things sewing related. 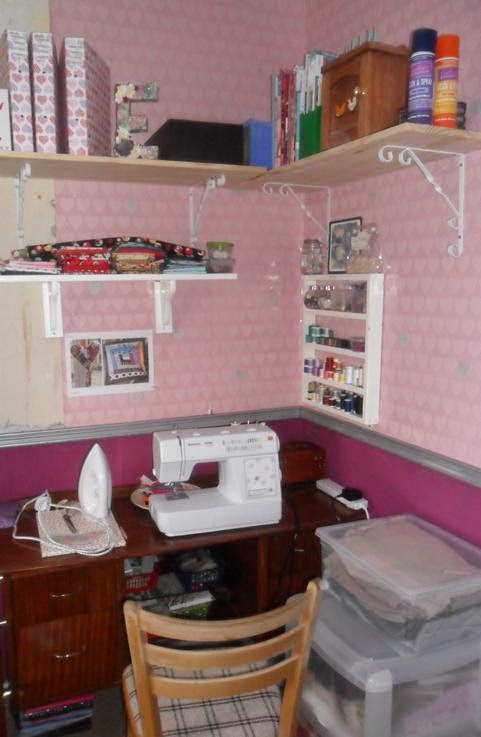 Please ignore the area without wallpaper ... it was hanging off when we moved in and wasn't worth conserving. We had hoped to decorate this room before we actually moved in but things didn't work out as planned ... and now, what with his sciatica and all, it could be some time before the painter and decorator, aka the EM, gets to this room!!! In the meantime, it's a cosy little sewing station complete with an re-purposed herb rack now used for storing cotton reels and jars of buttons. 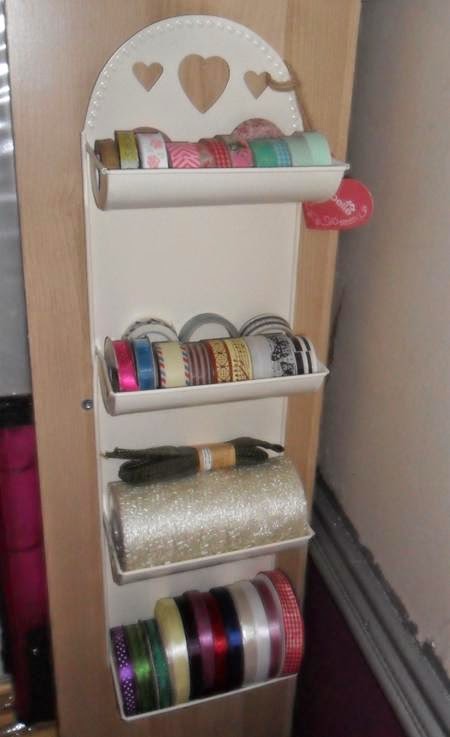 Not in the photo but to the left is this pretty storage for rolls of ribbon and washi tape.

Oh dear, not as brief as Julia would like but after four weeks absence there's a lot to catch up on so I hope I'll be forgiven for this lengthy post. I promise to keep it shorter next week :)

As usual, my plan is to visit as many of you as I can. Perhaps, not all today ... well, I am running a tad late ... but over the next few days because I'm really looking forward to catching up with what you have all been up to in my absence.

In the meantime, I hope you have a very happy WOYWW.

Glad you are feeling better, great nose around your room and the small sewing machine is gorgeous. Looks like I have caught your cold as I am down with it now, pain isn't it? BJ#78

A lovely crafting space & like the cat your making. Happy woyww jill #31

I love the idea of having a little sewing corner inside your bigger sewing corner. Like a set of Russian dolls!

I adore the miniature Singer.

Your new storage shelves are great.

What a lovely place to work, Elizabeth - all your goodies so well arranged around you.
Glad you are beginning to feel better.
Margaret #25

Might not be short but I've really enjoyed my visit :-) love that little sewing machine :-)
Hugs,
Annie x. #51

I just put a craft room in my dollhouse and I have that same sewing machine! It's in a couple different posts on my blog somewhere. Your stuffed cat is so cute too. Thanks for stopping by! Happy WOYWW! Sandy Leigh #1

Lovely to see you & love all your pics, great to see how us crafter's repurpose stuff! No desk from me, it's empty - I put it all away to clear my desk & mind before I start the next lot of DT makes. Take care Zo xx

Glad you are feeling better Elizabeth. Love your sewing corner. Was trying to set up similar in the smaller of our two spare bedrooms ( have to be able to use it as bedroom as well when family visit) but everything on hold for now. Happy WOYWW Anne x #48

G'day Elizabeth
I haven't participated in WOYWW for maybe 9 months and I am trying to get to as many as I can this week..oh I love the colours in the fabric at the right and Cedric is gorgeous. The little sewing machine is divine too.
hugs
Annette In Oz #23

My first time here- so off to snoop around a bit more!
Love the kitty and the ribbon holder!
Thanks for visiting your kind words and the snoop around your place.
Robyn 5

Glad your feeling better that is one serious roll of ribbon. I know if I couldn't get around to putting up new paper I'd be taping lots of creations right over top of the missing wall paper space Voila no one it the wiser :) hugs Nikki 3 thanks for the visit too

Yay, it's good to see you again! Love all your sewingy bits and pieces...that Moda fabric is gorgeous, my fav colours! Whilst I adore sewing, putting stuffing into things is my idea of purgatory....I know you have to do it bit by little bit and take your time...ggrrrrrr, it drives me mad! Wy can't I just shove a lot in at once. See, patience was never a strong point of mine, lol!!!!
I love your racks/shelves. All neat and tidy, that makes me happy :-)
Hugs, LLJ 45 xx

A woman after my own heart - all those fab crafts and a dolls house to boot! I love the little machine. I'm on a roll to get through all the WOYWWs today, so will come back for a good, nosy blog visit over the weekend. Have a great week, Chris # 35

Oh Elizabeth, so lovely to peek round your lovely craft room. A real haven I think! Seems like you're loving sewing too - I'd have to sit with the sewing machine on my lap right now :(

Thanks for your comment about adverts on blogs. And I'm 100% for folk telling where they bought stuff, pros and cons etc. In fact, I totally love knowing about new stuff on the craft market as am sure you guessed. Ha, ha - I call you one of my shopping 'enablers' so please don't change a single thing.

Who knew that I really need a bit of plumbing kit for crafting though? Yup, it's intrusive and just turns me off - pun intended :))

Sunshine here in the Playground, hope you brought your sun hat.

Every inch of your post was pure entertainment, Elizabeth, so it wasn't too long for me! How lovely to catch up with you. Thank you for visiting me! A lot of us seem to have popped back in today ~ something in the air?

Thank you for sharing all the photos of the projects you have in process and cute Felix and your fabulous sewing center! I love your ribbon storage! I hope EM's 'psychiatric' nerve gets well soon! Hugs, Darnell #26

Mm hard going when you are not well Elizabeth.. but well done on Cedric and do I ever love the wee Singer how cute is that, Shaz in Oz.x

Forgot my number am now #30 Shaz.xx

So wonderfully organized! And I LOVE that cat!
xxDaniella~2

I love your little sewing nook. It looks quite cozy, missing wallpaper or not. I like the re-purposed spice rack. Sorry to hear about all the illness. I've had 3 colds in 3 months, which I suspect is actually the same cold being a bear. I'm glad to hear you are feeling better and can play some.