I've not been around for almost a week ... one of those nasty viruses is to blame ...  and there's been absolutely no action in the craft room! I'm still feeling less than 100% but thought I'd check in with a card that was completed before the bug hit. 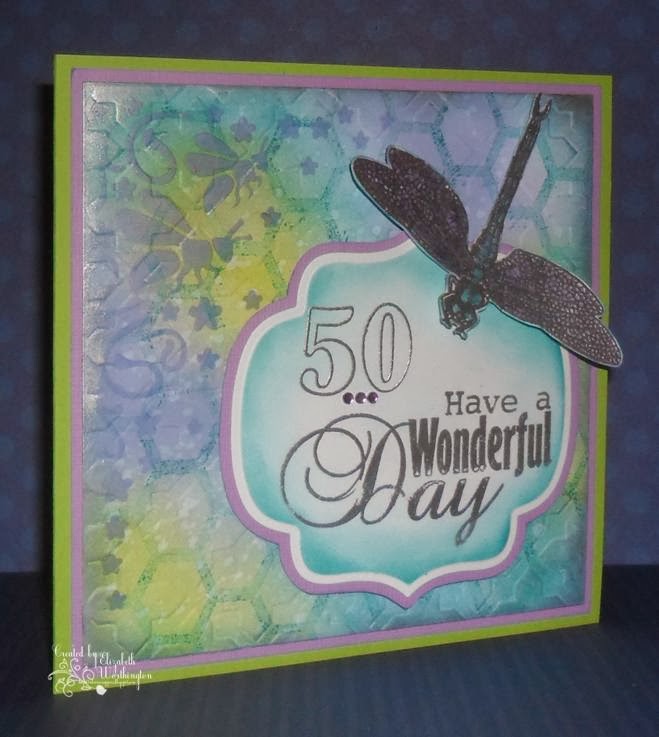 Made for our fellow crafter, and WOYWWer, B-J's very significant birthday so, of course, the colours used are based on her favourites - lilac, lime green and turquoise - and as she loves them, a dragonfly had to be included.

The main piece started out as a square of white cardstock ... it's actually pearlescent card but I worked on the reverse side ... as recommended by Sheena Douglass. This bit of card has been subjected to just about every technique you can think of. First, a colour base was created by sponging it with ink in the three colours - Adirondack Brights Citrus, Rangers Shaded Lilac and Peacock Feathers distress inks. Next, water was sprayed over it and after leaving for a wee while it was dabbed with paper towel to create a lovely watermarked effect. Once dry, I decided I wanted some more inky interest on it so I inked up a Chicken Wire mask (Clear Scraps) with the Peacock Feathers which I then placed inky side down on to the card and passed it through the Cuttlebug, using just the plate configuration for die-cutting, not embossing ... this transfers the ink without embossing. Next up was the Thistle mast (Imagination Crafts) - I inked up only the insect/flourish corner detail on this mask ... those wee winged beasties look awfully like Scots midges to me :) ... using Shaded Lilac. That done, texture was added to it by dry embossing using a Fretwork mask (That Special Touch). The final touch was to apply silver gilding wax (Pebeo) around the edges. 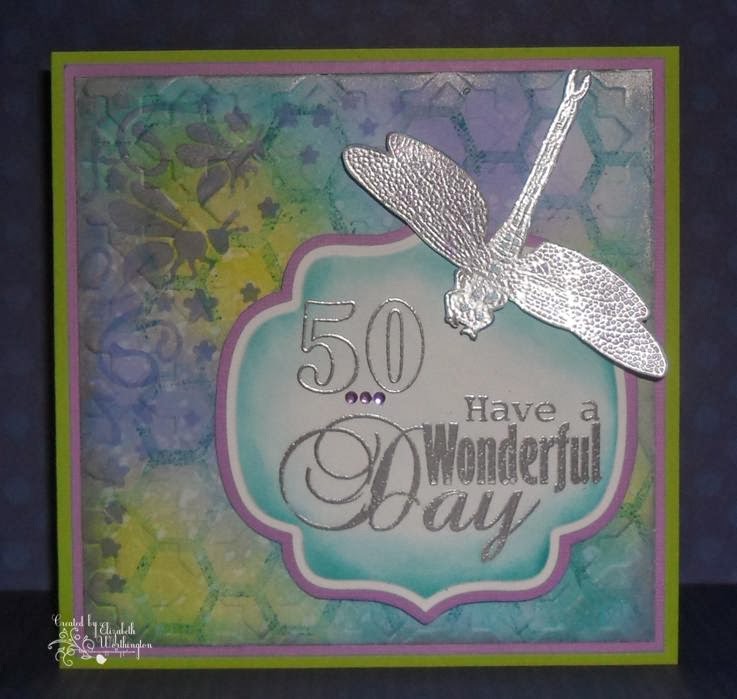 The dragonfly was made using a Stamps Away stamp, VersaMark, silver embossing powder (Heat It Up) and, though it's not too clear in the photo, it's painted with H2Os in Royal Satin, Sea Spray and Just Peachy (from the Summer Fun set). 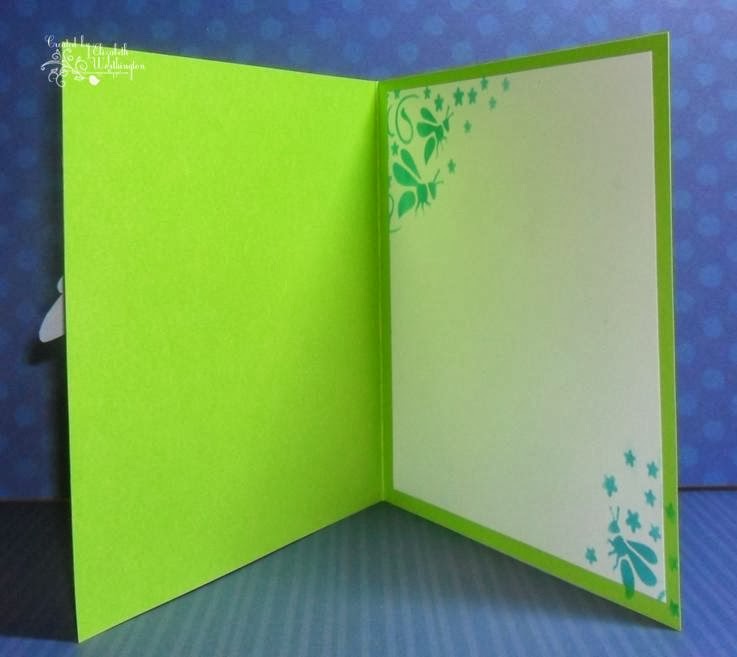 More of those pesky little midges made their way on to the inside :)

Other Materials Used:
Cardstock: American Crafts lime green for base; Core Color Core'dinations VaVaVoom lilac for matting and layering; Neena Solar smooth white for stamped topper and inside of card
Stamps: Sheena's A Little Bit Sketchy Only Words - Through the Rain for the sentiment; the numbers were included in a giveaway from Jo, Jozart last year -  NBUS, but deserved to be used much sooner so thanks Jo :)
Die for Topper: Spellbinders Nestabilities Labels Nine - the lilac mat was made by tracing around the die and cutting out.

I started to write this post up on Wednesday ... two days - that has to be a contender for the Slowest Post Ever Written Award :) It's just taking me a bit longer than usual to throw off this bug, one minute I feel perkier, the next I have to lie down for a while ... very frustrating!

So, I hope this finds you fit and well and having lots of crafting fun.

This is a beautiful card. I love all the little details like those bees. I'm going to have to try your die cut ink transfer technique. I hope you feel better soon.

Sorry to hear you've not been well, there's a lot of it about (me included) but glad to hear you are recovering.
This is such a pretty card and lovely colours :O)
Jackie xx

Hope you feel better soon.
Your card is lovely. You worked so hard to make a gorgeous base for this one...and it is a corker!
Great card, Elizabeth!

A beautiful fusion of colours Elizabeth.

Feel better soon and hope you have a good weekend.

Oh Elizabeth, so sorry to hear you're not feeling very well, Hope it runs away soon!

I adore this card, sheesh you did put such a lot of work into it - fabulous!

Tell you what, much as I love Scotland I don't recall midges quite that huge - although from their bites you'd have thought so!

These nasty virus's are a pain l'm still carrying a cold since before Christmas and l just can't shake it off although having said that all the family have had it so we probably passed it on from one an other hope yours isn't going to last for too much longer ......Your card Elizabeth is absolutely beautiful the colours are stunning and l do like a dragonfly we often get them around the fish pond so colurful like you have done here take care xx

So sorry to read you haven't been well .. .. I hope you are soon sorted. There seem to be quite a few bugs going round at the moment :-(

Loving your card very much.

Such a beautiful colour combo.

Take care of yourself Elizabeth and don't try doing too much too soon!

Elizabeth, surely hope you are all over this virus by today. I so enjoyed reading all the techniques you've used on this pretty card. I kept reading, going back to relook at that particular part of the card. There's so much texture & interest with all the interesting techiques you've done on this lovely 50th card, and your friend will absolutely love it! TFS & Hugs

Hi there. Sorry to hear you have not been well. I feel your pain! Hope you are a little better now.
This card is beautiful. Love it.
Hugs
xx

Hi Elizabeth,
thank you for all your wonderful comments on my blog.
This card is stunning. I love all that inked background, if I tried that it would look like mush.
I am a great lover of owls, dragonflies, and butterflies, so your dragonfly is amazingly beautiful. Love every bit of this super creation.
Lots of crafty love. Jenny L.