Not such a good afternoon, actually. The day started well, but the sun went in and the rain came out and the washing had to be brought in again. Too much to expect two good days on the trot, I suppose ... maybe tomorrow will be better.

In the meantime, remember the inky backgrounds I showed on Wednesday, on my WOYWW post, well, here's the first of the ATCs I've completed. 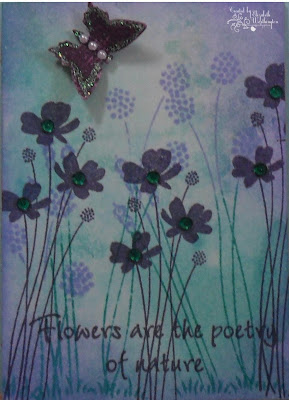 The background of this one is a gorgeous combination of Tim Holtz's Peacock Feathers and Shaded Lilac distress inks - love this colour combo.

To finish the ATC, I've stamped using a selection of flowers and grasses from Kanban's Spring Meadow clear stamp set. The flowers and grasses in the background were inked up with the lilac on the flower heads and the turquoise on the stems and grasses ... very daring of me to try this technique, but it worked :)) The more prominent flowers, and the sentiment, were inked up with Versafine Imperial Purple and a green gem has been added to each centre. The sentiment is Flowers are Poetry by Hero Arts. The butterfly was punched out of a snippet of purple coordinations cardstock, sanded and then rubbed over with TH's Rock Candy distress stickles, the wings were edged with glitter glue and, finally, three tiny pearls were glued along the back ... a lot of work went into that butterfly :))

Not a lot of snippets used here, but every little bit helps! The ATC base was made from a snippet of white cardstock and the butterfly made from the teeniest bit of purple coordinations card ... the shade is probably called aubergine or something equally exotic but there is nothing along the edge to say for sure ... so I'm submitting it to Di over at Pixie's Crafty Snippets Challenge - 28, for her inspection. As the fab DIs were a gift from fab Di , I think it's only right that she gets to critique what I've done with them :))

And following on from that, here is more of what I done with them. 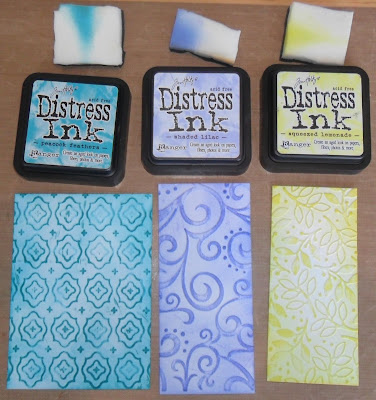 Aren't these colours deee-vine - I just love the vibrant turquoise, the lilac is dreamy and the lemon is delicious. The white embossed card was just bits I had stashed away - the result of trying out some new embossing folders ... well, they were new a few months ago when I put them through their paces! Now, hmm, what do I do with these ... I'll have to put my thinking cap on :)

I mentioned in my yesterday's post that, because the weather was just gorgeous, the EM and I took a drive up the coast. Our first stop was Kelburn Castle and Country Park  at Fairlie ... specifically to see the castle. First, we checked at the Information Office to ask how far I would have to walk to the castle and having been assured it wasn't too far to a good viewing point we carried on, camera at the ready. 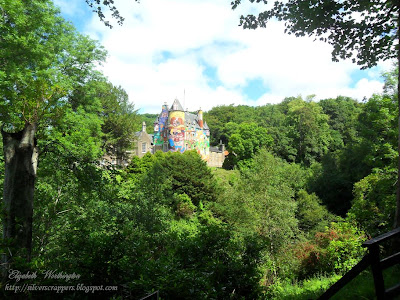 And this is our first sight of the castle - isn't the setting just too beautiful. The thirteenth century castle, which is still very much a family home, is owned by the Earl of Glasgow, Patrick Boyle. His family have lived in there for some 800 years or so. Orginally the family name was de Boyville but this changed over the years to Boyle. The de Boyvilles from Caen in Normandy came over to Britain with William the Conqueror in 1066 and the present branch of the family settled in Kelburn in 1140. 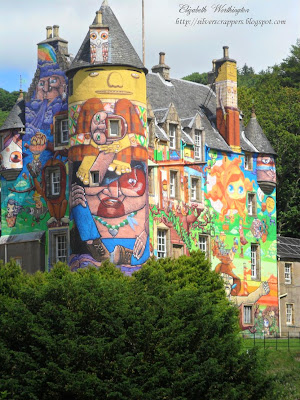 The ultimate in graffiti art. It's the work of four Brazilian graffiti artists and was completed in 2007 at a cost of £20,000.  Only last year, the mural was named as one of the world's top 10 examples of street art by author and designer Tristan Manco - on a par with Banksy's work in Los Angeles and the Favela Morro Da Providencia in Rio de Janeiro. I've yet to work out how to embed these videos but here's a (speeded up, of course) link to one on YouTube of the castle being painted - just click here.

Admittedly, rather like Marmite, the graffiti is something that you either love or loath ...what is certain is that the Earl loves it so, having recently discovered that the cement coating on which it is painted is causing damage to the original castle walls, it is sad for them that it has to be removed.
The castle is located in the grounds of Kelburn Estate, which also houses a country centre open to the public and featuring a series of outdoor attractions. A secret forest, a crocodile swamp and an amazing adventure course makes the centre one of Scotland's most thrilling days out for kids.


Given the limitations on how far I can walk at the moment, here's the photos of those attractions I did see. 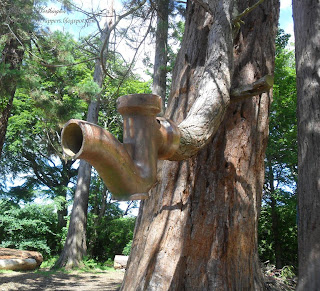 Wellingtonia tree - incredibly old - with the addition of some modern plumbing. 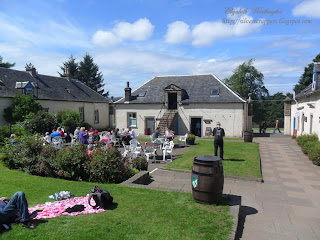 The seating and picnic area just outside the tearoom, which is situated in the old stables. 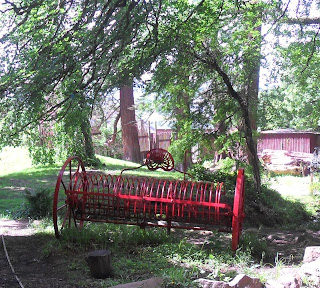 There's lots of well-preserved farming equipment scattered around the grounds. 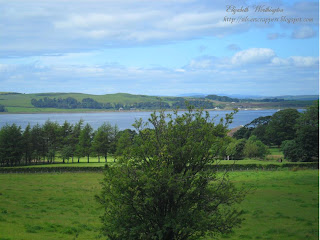 This is the view from the car park ... absolutely stunning! Looking over the Firth of Clyde to the Isle of Arran. 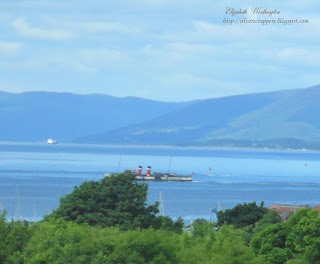 And finally, a glimpse of the ferry heading to Arran.

As you can see from this brief glimpse Kelburn is situated in a most beautiful location and is well worth a visit - but you will have to be quick if you want to see that grafitti :)

Just a few minutes ago, the heavens opened and everything in the garden got another drenching. Will it ever end!

Here's wishing you all a lovely weekend, wherever you are and whatever the weather.

That is a stunning atc ...love the colours.
I love great graffiti and am sorry to hear it has to be removed ....looks an amazing place ...wish one us drove.xx

Fabulous ATC Elizabeth! Love that butterfly and the colors are gorgeous. Thanks for sharing the photos and the video link. The graffiti here is pure and simple vandalism. It’s all hideous black marks on walls, homes, fences, signs, basically on anything that stands still, often unfit to read and always unasked for. No artist like that around here.
Hugs
Bernie

Love that ATC! I agree those colours are deeeevine - on my wish list!!!! M x

What gorgeous colours. I love what you've done with them. Kelburn looks an amazing place to visit!

Absolutely stunning Eliazabeth and thank you for showing and sharing these:)x

Wonderful ATC - and am so glad the DIs are to your liking:)

I'm sure the castle was on TV about 12 months or so ago - amazing indeed.

Gorgeous ATC there Elizabeth and lovely photos of Kelburn.
I think we had that rain here about an hour ago. It was so hard the digital dish wouldn't work so I put Funny Girl on instead. Much better!

A beautiful ATC Elizabeth and wonderful photographs. The castle looks fantastic, what a shame it has to be removed (not the castle, the graffiti art) :o)
Jackie xx

Beautiful ATC Elizabeth - fabulous colours. What a marvellous day out you must have had - we really don't spend enough time exploring the sights on our doorsteps.

Gorgeous atc, hadn't thought of using the blue and purple together but will be now. Wow it certainly looked like you had a fun day out. Hugs, Amanda x

Your ATC is gorgeous, Elizabeth. I adore those colours.
What an amazing sight that castle is, I've never seen anything like it. It looks like it was a great day out and what beautiful weather you had.
Thanks for sharing such beautiful photos.
Enjoy your weekend.
Hugs Lisax

Fab ATC Elizabeth. And my goodness me . . . what an eye-opener your castle pictures are! Never seen the like!

Fabulous photographs and the colours of those distress inks are gorgeous (grabs her little book of "things I would one day like" LOL!!).

Fabulous embossing too and as you say ... every snippet used helps!!