It was my turn to choose a theme for today's Christmas Card Club challenge - a difficult task but after much inner debate, not to mention more than a little help from Margaret, I opted for 'holly and/or ivy'.

And because my goal for this week is to concentrate on stash busting all the supplies for today's cards are not new - check out my post for Wednesday to see the boxes I'm working from.  I managed to make four altogether, two with holly and two with ivy. 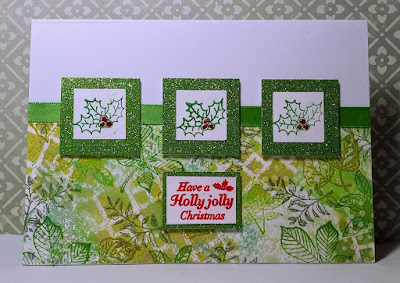 The bottom panel on this one is a leftover piece from a masterboard I created autumn last year using lots of paint, leaf stamps, ink, stencils and texture past. The matting for the holly sprays and greeting was cut from scraps of glitter card. I had to cheat and use two snippets, butted up together, for the greeting. 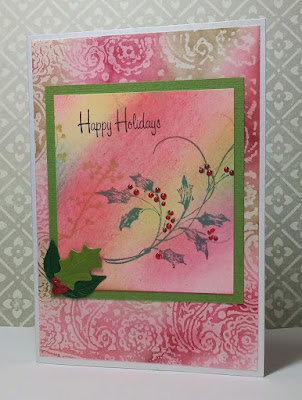 The topper for this one is the last scrap from another masterboard, created way back in 2018. The background is made up of sponged inks. It was overstamped with two of my favourite Penny Black stamps , Winter Bough and Winter Berries in shades of green and gold. The die-cut holly spray was made from snippets of green and red cardstock.

The background piece, if I remember correctly, was made using a technique that involved embossing wax paper which was then ironed on to a white card base to create a resist for ink. The backgrounds on the next two cards were created in the same way. 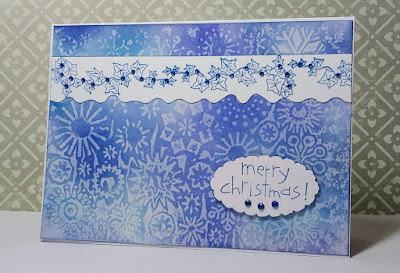 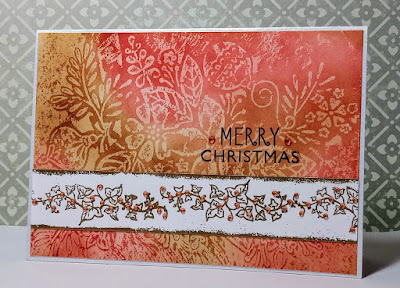 The backgrounds were almost pretty enough to leave as is but, of course, the challenge called for some ivy so I stamped up some narrow scraps of white cardstock with trails of ivy. For the blue one I used a stamp from the Have a Holly Jolly Christmas set - the same one used for the green card above - and Memento Danube Blue ink. And I used my very first stamp - bought in 1995 - for the red one. This time I embossed the ivy trails with gold powder. In truth, there's not a lot of difference between the two stamped images - I just have a special fondness for the old wood-mounted one. The edges of  the panel are embossed in gold too. The ivy trails on both cards are decorated with tiny gems.

That's it from me for today's CCC challenge. This brings my total for this year to five already - not bad!

I'm also submitting one of these cards to Pixie's Snippets Playground - Challenge #369 - I'm not sure which one yet as I've used a bunch of snippets in the making of them.

I hope you will pop over to see what my teammates have created for today's theme. You'll find a list of their names and links on my right sidebar - as always they are so much more creative than I will ever be.

What a great array of cards Elizabeth. My you are on a roll, I'm just glad I don't have to choose a favourite. Hope you enjoy your day. Hugs Rita xx

Hi Elizabeth....my you have been busy getting inky....fabulous backgrounds and your gorgeous additions of stamps and sentiments....you are getting well ahead for this years cards....xxxx

Hi Elizabeth, loved the choice of theme for this challenge.Gave me the chance to start stash busting myself, as I'd glittered so many images back last year before illness took over! Love your 4 cards, all so different. Must give that resist technique a try one of these days. Hugs, Shaz X

All beautiful Elizabeth and I still prefer the wood mounted stamps too.

These cards are beautiful. Sorry I didn't follow the theme but I had mine made before I knew what it was xx

Snap, my card front stands at 5 too. I like your waxed backgrounds. I have tried that technique but didn’t manage to get such a definite pattern show through as you have on yours. I must revisit and try again. Love the ivy panels you have created. I do have quite a few ivy stamps and dies but time was against me after having thought this week was stars so couldn’t go routing through my stash for too long. Hugs Mrs A.

Hello Elizabeth, thanks for the challenge, I got to use neglected stamps, seams a few of us stash busted.
Now your selection of cards is fabulous, absolutely beautifully designed and coloured cards. I couldn't choose a favourite, Kate x

You are certainly on a roll with these lovely cards Elizabeth. Thanks for a great challenge. Christine x

Thanks for a great theme Elizabeth and what a fabulous set of cards you have created too. Beautiful stamping and inking on them all.
Lorraine

Great theme Elizabeth - I love your makes - quite a tidy pile there! Well done you! Hugs rachel xx

A great set of cards Elizabeth! All using snippets as well. You get three goes on the swings this time round :)