What's On Your Workdesk Wednesday - Week 513

Nearly didn't make it but it's Wednesday again, time to bare all for the sake of Julia and WOYWW, ready or not! There's been a lot of shifting stuff around going on here over the last few days as I now have a new sewing room. I know, a craft room and a sewing room ... how spoiled am I!!! Actually it's a combined sewing and music room - the EM's keyboards needed a home too. In fact, I'm listening to him tinkle the ivories as I type - couldn't be better. 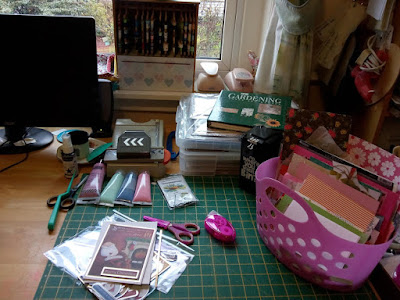 So you wouldn't have been able to see this desktop this morning ... it was still covered in sewing paraphernalia. Now all that's been relocated, and I've had a chance to make a CCC card for this week, this is what's on it right this moment. The stack at the back has changed - I've put all the Christmas stash away for now. I might bring it out again in a few months for Christmas in July - maybe. What's in the boxes now is more seasonally appropriate. The Gardening Album is still there - mocking me of course. I've also brought out the scrap basket - I'm planning to delve in before it becomes any more full. The aforementioned CCC card and the supplies used are waiting to be put away too. Behind that is a selection of acrylic paints, an ink spray in a heavenly shade of navy, and the tub of Vicki Boutin's  iridescent glitter  texture paste - lovely stuff. 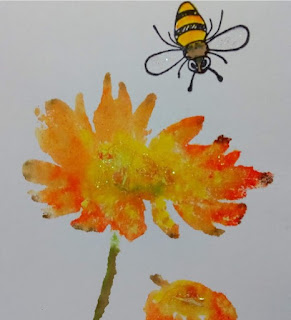 I tried it out on this 'marigold' and the bee's wings recently and loved the effect. I know shiny stuff doesn't show up well in photos but I hope you get some idea of just how pretty it is.

And now the book bit. 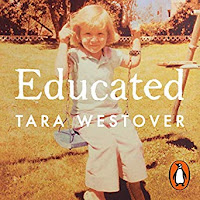 Only one today but it's special. 'Educated' by Tara Westover is a thoroughly moving, thought provoking and inspiring memoir. After reading a good review of this book and seeing the author being interviewed on TV I was pleased to find it was out on audio. Westover was brought up by parents who were fanatical Mormons and in a household where madness is combined with ingenuity. It was an incredibly dysfunctional family. Despite this she overcome the difficulties and went on to obtain the education that was denied her as a child. This book left me heartily grateful for parents who knew the benefit of a good education.
Well, that's it for today. The music has stopped and I must think about dinner. I'll be back later to check out as many of your desks as possible.

Have a wonderful week.

Hi Elizabeth, love the card. The marigold is fab, and yes, can see the shimmer.Have a lovely week, Hugs, Shaz #1 X

that marigold is gorgeous, you can see the sparkle! How lovely that you can craft whilst EM is serenading you! Helen #3

I really love that marigold and you can really see that's it's shimmery! I love the fact that you have your very own musical accompanist while you craft, you could hire him out!!
Hugs LLJ 5 xxxx

Gorgeous card, loving the marigold. The colours of the paint on your desk look interesting too. Have a great woyww, Angela x15x

The marigold is lovely and so nice to see when the day is a dull grey one.
Thanks for the book review, I’ll put it on my list
Lynn x 7

That sparkly texture paste is gorgeous Elizabeth. How fabulous that you get to be entertained while sewing. I can't take credit for the parchment work as it is Eva's. Happy WOYWW. Sarah #2

Yes can see the beauty of the texture paste dear Elizabeth love th ecoours and shade and so glad hubby is tinkling the ivories.. how nice to hear that.
Happy belated WOYWW, Shaz in Oz.x #13

The marigold is lovely - I will show Max - would probably wet or needle felt nicely wouldn't it. x Jo

Pretty marigold and shimmering bee. Looks like a beautiful watercolour effect .... my kind of card.
sandra #19

Ah Elizabeth, MI’m glad for you about a sewing space, even more glad that it’s combined...that’s why when we planned the extension, we put the office where it is. It means I can sit at my desk and still see Mr Dunnit in the lounge. We never even bothered to put the door on in the end. makes a difference to the amount I do, especially on a Sunday when he just wants to collapse in front of the tv and I want company but not football!! The Glittery paste does show nicely, I must say the Vicky Boutin range is immensely appealing to me, so colourful!

I LOVE your little bee on the marigold! That book sounds fascinating. It's reminding me of kids who were not vaccinated, now grown up who are getting themselves vaccinated. So sad what some parents do to their children thinking they are doing the right thing. Have a great week! Lindart #29