What's On Your Workdesk Wednesday - Week 507

I see that I haven't joined in on a Wednesday for three weeks - that's a long time for me to be absent from Julia's WOYWW blog hop. But I'm back today and, fingers crossed, that's an end to the winter bugs that have prevented me joining in these last weeks. Not that that I've been crafting so I wouldn't had much on my desk to share anyway but here's what's on it today. 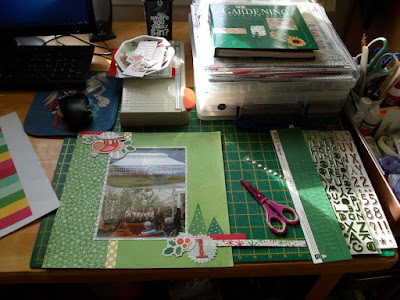 As can be seen, I'm still trying to finish a layout I started weeks ago! While I've been poorly I've had plenty of time to think about what I should be working on and, well, it's all those unfinished projects I have tucked away. I haven't counted but there's quite a few. So, apart from the layout there's the garden album described in yesterday's post. I'll be working on it over the coming weeks until it's up to date.

So that's it for what's on my desk today. I'm still in recuperating mode so it's slow work but better that than nothing at all. Happily the weather is improving too so I've been able to take a wee ramble round the garden to spot these signs of Spring.

I'm particularly pleased to see that the snowdrops have not only survived but are increasing, if only by a few - there were none when we moved here.

That's it for this week. No books this week - I've been too poorly to concentrate fully but that's improving now too so perhaps I'll have one or two to write about next week.

I wish you all a very good WOYWW and a great week to come. Many thanks for popping in - your comments are much appreciated.

It's lovely to see you back on the desks, these bugs have laid a lot of people low, me included. The And Finally on Shaz's desk today particularly applies to you, lol! At least you've got a plan to deal with all the UFOs now.
I love to see the Spring flowers picking their noses through, I've got some little Tet a Tete daffs out at the moment.
Hugs LLJ 8 xx

Hi Elizabeth, good to hear you're feeling better. Love the snowdrops and crocus. We had a drive to my Moms on Sunday, and we always go the backroads countryside way. The hedgerow banks were covered in masses of snowdrops, it was a lovely sight. Have a lovely week, Hugs, Shaz #15 X

Glad to hear that you are on the mend Elizabeth and hope you're back to full health again soon. Good to have you back. Happy WOYWW. Sarah #5

Good to have you back miss E. I was so out of it last week, it’s such a waste of time isn’t it., and I resent not being able to bounce back so fast as I once did! I’ve got The Salt Path as my next listen, hope I enjoy it as much as you did.

So pleased you're feeling well enough to join in this week Ellie. These bugs really have taken it out of so many of us....I just keep falling asleep but I guess that's my body making me do what it needs. I love all the signs of Spring....that must mean warmer days are coming.
Hugs,
Annie x #11

Glad to see you back, and that you are recovering. It's so lovely to see crocuses out. Thanks for stopping by. Helen #1

Lovely layout - I'm enjoying the feel of Spring with that pretty green. The flowers are looking lovely, I'm still waiting for my crocuses to flower which considering I'm right down on the south coast I thought they would be out by now. Glad you are feeling a bit better, so many bugs around at the moment.
Diana x #14

Nice to see you getting back in the mood for some crafting. Pretty flowers too, spring certainly seems to be on it's way. Have a great woyuww, Angela x13x

Hi Elizabeth, I was AWOL for a few weeks myself. Glad to hear you are feeling better. I'm loving the first signs of spring everywhere, always lighten my heart a little. The layout looks lovely to me. Have a lovely week Heather x #17

Hi Elizabeth, glad you’re on the improve not fun at all being poorly.
I love the layout, even if it’s slow it will be done well an dthats what counts... adore snowdrops something special about them and the crocuses, last time Isaac them in wild was in Finland.
Happy belated WOYWW, Shaz in Oz.x #4

Oooh! Lucky you! We don't get signs of Spring until March at the earliest, usually not until April! Sorry you haven't been feeling well, glad you are feeling better!It's a good thing to get those unfinished projects done, I have to do that too! Sorry I'm so late this week, have a great rest of your week, Lindart #25