I finally completed the layout that's been taking up space on my desk, and in my head, for far too long so, for the record, here it is. 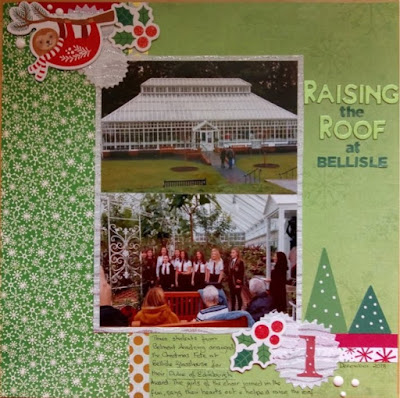 The photos were taken at the Christmas Fair in the Glasshouse at Bellisle Park on December 1st last year. The fair was arranged by three local secondary school students working towards their Duke of Edinburgh Awards. The choir came along to give support, and very good they were too.

Lots of old supplies were used on the layout - everything from 2009, Cosmo Cricket 'Jolly By Golly', to 2013, Simple Stories 'December Documented', as well as a few newer, 2018, die-cuts from American Crafts 'Cozy & Bright'. I can't tell you how good it is to dip into the stash I've been amassing for years - it's a real treasure trove just waiting to be discovered!

Unfortunately, I did make a mistake in the journaling - messed up my writing - so I covered it up with a strip of matching paper. It's not too noticeable and I doubt the scrapbook police will give me too much grief over it.

You might have noticed that I'm numbering my layouts, same with any cards I make too. It's just for curiosity's sake - as the slowest scrapper in the world it will be interesting to have a total for 2019.

Thanks for dropping in - it's much appreciated.