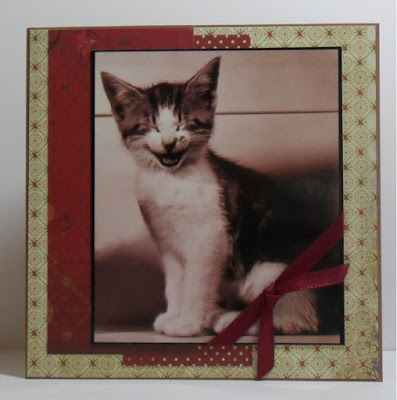 I recycled this image of a grinning kitten from a commercially produced card I received a couple of years ago. I'm a sucker for kittens anyway but this one really makes me smile. It's been teamed up with papers from a very old patterned paper pack and brown card that's so ancient I can't remember where it came from.

To make the card I did the following:


I will be submitting this card to the following challenge:

Like the last snippet card I made, link here,  this card is made from winter themed paper but I don't think it's obviously a Christmas one. It's a card, I think, that would suit any one of quite a few occasions and, for sure, the eventual recipient will be cheered up by that happy kitty.

Take care and have a great weekend.

Love the look on the cats face.
Thanks for joining us at Crafty Hazelnut's Pattern Paper Challenge
Julie T