Back Again - A Catch-Up

Some of you might have noticed that there's not been much going on here for a week. My absence was not intended at all but my husband suddenly became ill in the early hours of last Monday and had to be admitted to hospital. 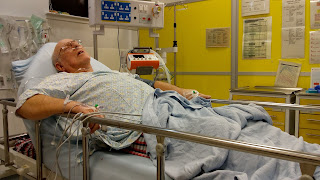 This was him an hour or so later - hooked up to every bit of machinery in a Resus cubicle. He was a very sick man indeed. From Resus he was transferred to the High Dependency Unit where he stayed a couple of days until he was well enough to be moved into a General Ward till he was allowed home on Friday. 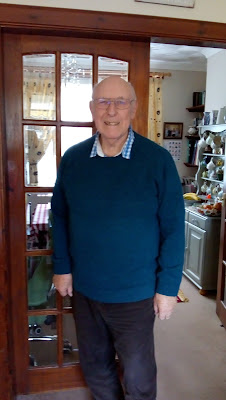 But here he is today. Looking so much better (and half a stone lighter).

He had pancreatitis caused by gallstones causing excruciating pain. Further, the machinery revealed that there was something wrong with his heart. Several x-rays and scans later it was discovered he had a blockage in his heart. So he's not entirely out of the woods yet. He's to have an operation to remove his gallbladder first. In the meantime, his heart will be monitored regularly and it's very probable that he will eventually have to have a pacemaker fitted. For now, he's recuperating and taking things a bit more easy than he is used to - no exercise classes, no lifting heavy weights, no dashing about all over the place as is his norm, etc.

So there you have it. Even if I had felt like blogging, crafting, etc., and I certainly didn't, I was either at the hospital, or travelling back and forth to it, for the week. I've missed 'In A Vase On Monday', 'What's On Your Workdesk Wednesday', 'Friday Smiles', 'Rudolph Day' and goodness knows how much else so there's a lot to catch up with but my mojo has gone walkabout and it could be some time before it returns.

In the meantime, I wish you all a very healthy, happy week.

Email ThisBlogThis!Share to TwitterShare to FacebookShare to Pinterest
Labels: Catch up

Of course there’s nothing I didn’t already know my friend but just wanted to send you lots of love and positive vibes. I hope he behaves himself and rests all he can so that they can soon sort out the health issues for him....in the meantime get that jigsaw done 😘😘😘
Biggest hugs for you both,
Annie x

Oh my Elizabeth how awful for your husband, you too, must have been so frightening for you both. It's good that he's home for now and can hopefully regain some of his strength. Blessing really that the heart issues were found and that they can be dealt with.
Sending healing thoughts, Kate x x

Oh Gosh Elizabeth, I saw the picture on Bloglovin' and dashed off here straight away. So sorry to hear you have had such a worrying week but so glad he looks much better now. That weight loss will do him no harm if he has a problem with his heart. Tell him not to worry about the Pacemaker, I have one and it is fine and I even forget it is there.
Take care, the two of you.
Love
Neet xx

Prayers for you both and hopes for a speedy and safe recovery.

oh my goodness me, Elizabeth! what a stressful time you have been through (and more to come by the sound of things) sending gentle hugs to you both!

Oh good grief Elizabeth. I spotted a comment connected with the Playground and came back here (will reply to Snippets when I can) but am so stunned that this was all happening and I had no idea at all. Hope you and of course Alan are on the right road now and that he will soon be well my sweet friend!

Sorry, Di, I didn't think to let you know. Truth is, it took me all my time dealing with the situation to do anything but eat, sleep, travel to and fro the hospital and spend as much time as possible with Alan that week! He's okay at the moment but he has a couple of hospital appointments this week - a pre-op tomorrow and two to have a heart monitor fitted for 24 hours on Thursday and Friday. I think this is going to be an ongoing story for a while to come. Many thanks for your well wishes - they are much appreciated. Hugs, E xx

I had a senior moment and forgot earlier that I did have more idea of what was happening with Alan! Apologies - blame my age kiddo! Mind you, even our Darnell has a pace maker so I expect this will give Alan a real boost. You'll have to keep him reined in!

Having a wee catch up on your blog. I seem to have gotten so out of touch with my blog friends last year.
Hoping to make some changes in 2018 and back into the swing of things in a friendlier way!
Best wishes for good health, a smooth op and a good recovery for your DH.