What's On Your Workdesk Wednesday - Week 381 - and Nuvo Crystal Drops

So sorry to be so late joining in the fun, and sharing my desk, at Julia's What's On Your Workdesk Wednesday but the weather has been warm and sunny today so I spent much of it working away in the garden. My excuse! It's the equinox tomorrow which probably means that there will be fewer and fewer lovely hours to spend pottering among the flowers. Oh, and, of course, it's raining now!

Well, a bit of change on my desk today. The bits and bobs have been put away, for now, because I'm planning a little sewing project. 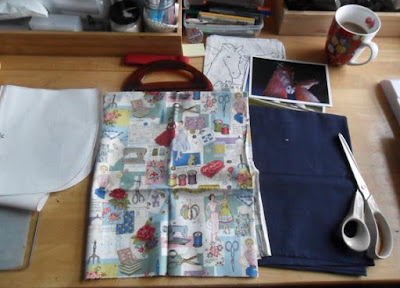 I need a knitting bag. Not for knitting, I don't knit, but for crochet. A bag will be perfect for carrying some yarn and a hook to the craft club I go to on Thursday afternoons. And much classier than the bag-for-life I've been using up till now. The fabric I've chosen has great retro sewing images on it - sort of appropriate. The postcard above the navy fabric is of The Kelpies at The Helix, in Falkirk where we spent the weekend, all lit up at night. Under it is the paper bag it was wrapped in beautifully illustrated with a drawing of the Kelpies - too nice to throw though I have no idea what I'll do with it. Maybe it will appear on a scrapbook page some time in the future. Finally, that's a new flower-patterned mug, bought by the EM to replace the one he dropped on the kitchen floor ... it's a hard floor so it much didn't stand a chance!!! 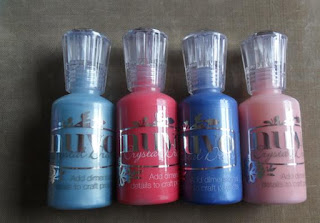 In last week's WOYWW post I mentioned these Nuvo Crystal Drops (a Tonic product) I had sitting on my desk and said that if any of you were interested I'd do a wee post on how I got on with them. During the weeks and months that was my blogging break much of my rest and recuperation was taken up with watching YouTube videos - well, it's crafting, sort of . At the time it seemed that millions of scrappers, okay, I exaggerate but it was a lot, were raving about them as a very suitable, and cheaper, alternative to enamel dots. So, of course, I just had to order a few bottles to try for myself. The colours are, from left to right, Wedgewood Blue, Red Berry, Navy Blue, Bubblegum Blush.

The way to use the crystal drops is to squeeze drops out on to a non-stick surface and leave to dry for 24 hours when they will have dried to a hard dot. I squeezed different amounts to get different sizes of dots. 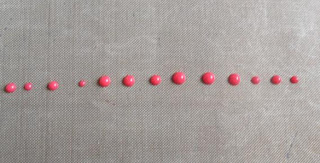 They are similar in a way to Liquid Pearls, however, the one advantage with the crystal drops is that they don't drop to a point so no need to tap the back to create a rounded shape. I believe it is possible to squeeze the drops directly on to a project but I wouldn't trust myself to get them uniform enough to even attempt it. 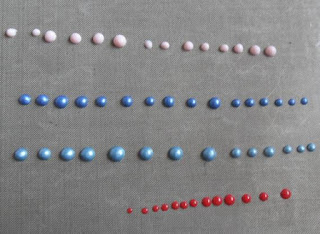 Here are my first attempts, dried and ready to use. Although all four colours were called Crystal Drops only two, Wedgewood Blue and Navy Blue had an opalescent finish. The Berry Red and Bubbegum Blush were a solid colour but no less lovely for that. 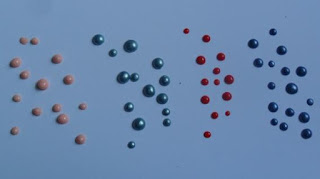 And here they are dried and ready to use.

To see how I used some of them pop back to my Sunday Snippets post - I've used them as embellishments on three of the cards featured. I think they look rather nice too.

They are a bit fiddly to use so they may not be for everyone but I liked the finished dots and, yes, they do make a great substitute for enamel dots. I may even have to acquire a few lot more colours very soon.

I hope I've managed to clarify what Nuvo Crystal Drops are for those of you who had never heard of them.

Belated Happy WOYWW to you,

What delights on your desk! I have seen Nuvo Crystal Drops and often wondered if they are as good as they seem, so Thank you for sharing your experience with them! Chrisx 32

Hi Elizabeth, I really could do with a bit more nice weather, still got pruning to do though I have crafting to do too. Nice fabric and love the dewdrops you've made. Have a great woyww, Angela x 16

I haven't heard of Nuvo Crystal Drops…wonder if we have them over here? I will have to go investigate. The pointy thing with the Liquid Pearls can be an issue. Great looking fabric piece. Vickie #4

The first thing I would do with the paper bag is photocopy it, then I could use it without losing it so to speak. Far to nice to use just once.
Love the idea of the knitting bag and the fabric seems to be ideal for the purpose. Hope we get to see it when it is finished.
Thanks for the information on the dots but I have not heard of them so haven;t been wondering what they were but rest assured, if I do come across them now I will know what to do with them. Such pretty bottles too.
Hugs, Neet 2 xx

Enjoy the weather while you can. It will be winter here before the blink of an eye. Thanks for sharing the Crystal drops with us!
Have a great WOYWW week!
Hugs
Chris #27

I just purchased a couple bottles of the Nuvo and love them! Funny thing is I didn't realize you could make the drops elsewhere. I put them directly on my projects. This is exactly why I love visiting other desks, I'm always learning something new. Thanks! Dorlene #48

those drops look great, but I am too ham-fisted to add them to a project once they are dry, it looks a bit fiddly, so I think I'd have to use them direct Hope you have fun with them Helen #1

Good morning my friend. You may be late but I'm later 😀😀😀 I really love the material and can't wait to see the bag you're going to make with it. The pearl dots look fab....I've got to be honest and say I would just have to dot them where I want them to go cos I would be sure to put them to dry and then put something in top of them lol. Hope you're having a good week.
Hugs,
Annie x #12

Oh, that fabric with the retro images is just darling!! I bet your bag will be awesome - the envy of the craft club ;)
And those Nuvo drops are pretty cool too. I don't use many items like that in my art and journaling, but it's nice to know what products are for and how they're used just in case I suddenly need something like that. Thanks for the explanation and review.
Hope #40

Great post E..those drops are lovely, but for me they's have to go straight on the project...I'm so not good at waiting for drying and then fiddling with glue! I love the idea of the not-for-knitting bag. I crocheted my crochet bag - used the t shirt yarn so it grew fast and was finished in a day, although it made my hands ache! Have fun sewing though, the fabric is really neat!