Hope your day is going well. Me? I've been fighting the ongoing and noble war against the dust and dirt that somehow finds it's way into Casa Worthington ... oh, how I hate housework :(

Anyway, it suddenly dawned on me that it is almost a week since WOYWW 309 and I still hadn't shared the completed scrap page - the one that was lying unfinished on my desk then - so here it is. 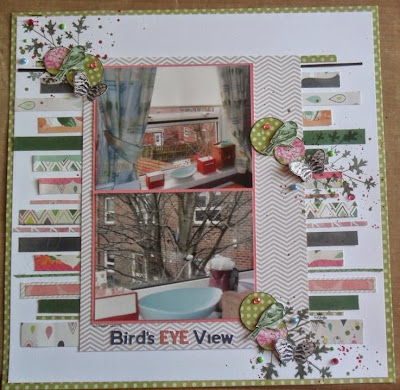 This layout was created almost entirely from materials left over from the kit I made and used to work through Shimelle's Return to the Collection workshop last year. The kit can be seen in this post, Return to the Collection - Part 1.  I did have to add two whole sheets, one of white cardstock and the other a green polka dot patterned paper, for the base but otherwise all other paper and cardstock used came from what was left of the kit.

I took the photos from my craft room window during our first winter, 2013/2014, after we moved in here. I spent a lot of time, perhaps too much time, watching, and trying to catch on camera, the magpies in the sycamore tree that was just outside the window, hence the photos and the title. They were quite a distraction! Not any more though, the sycamore, actually in our neighbour's garden, has been chopped down making quite a difference to my view, and the amount of light I now enjoy in this room.

To put the layout together I did the following:

- First, the photos were matted on to pink cardstock (Papermania Textured) ... there wasn't a big enough piece to mat both photos on so each photo is matted separately and then butted up together. They were then adhered to a larger piece of patterned paper (Docraft's Papermania Happy Days), placing them to the top left corner.

- Next, I mixed up the leftover strips of paper and adhered them randomly over the centre of a sheet of smooth white cardstock (American Crafts) that was trimmed down by about ¼" all round and layered on to the green patterned paper (Docraft's Papermania Happy Days).

- The title, found in the book that was also on my desk last week (The Ultimate Guide to the Perfect Word by Linda Latourelle), is made up of Newberg Navy Jillibean Soup alphas and Basic Grey Fresh Cut orange alphas.

- To make the three clusters I begun by stamping Inkadinkado's mini leaves in Versafine Olympia Green. Then, covering up the photos, I flicked red and green inks (Spectrum Noir AquaTint ink #12 and Mister Huey's Estate Green Colour Mists) around the stamped areas.

- Then  birds and butterflies (from Inkadinkado's Woodland Trail) stamped and fussy cut from scraps of patterned paper, and punched circles (Stampin' Up punches in two sizes) were layered up.

- The finishing touch, picking out the colours from the patterned papers, is from a mix of pink gems and blue pearls and green enamel dots sprinkled  around the clusters.

I'm happy to say that this is the last layout that will be made from that kit. There are a few scraps left but nothing big enough to to create a scrap page. I'll probably make one or two cards to satisfy myself that I've made the best use of the leftovers, but first I have to clear up the mess I've made on my desk ... then I'll see what can be done with them.

I wish you all a lovely evening.