In A Vase On Monday - Spring Charm 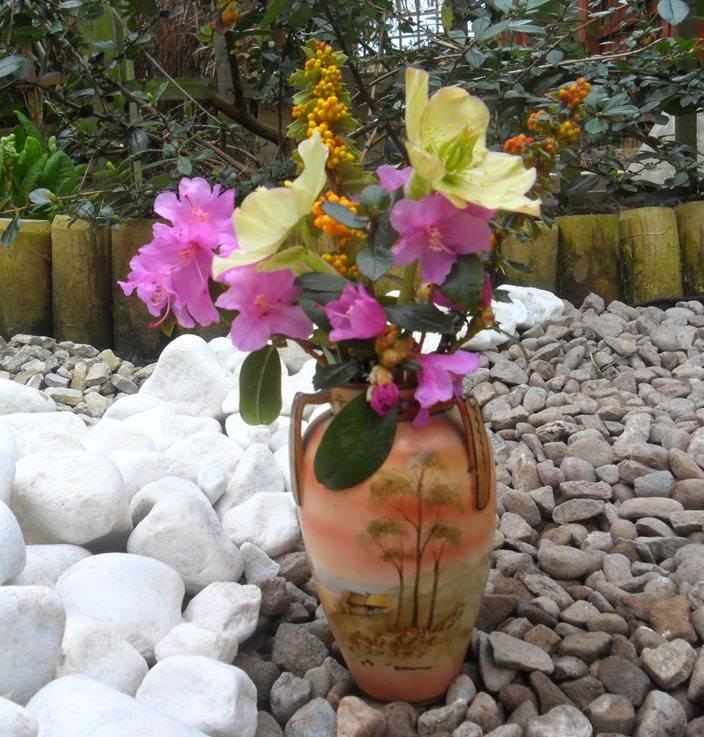 Monday again and time to join in with Cathy at Rambling in the Garden and show today's garden discoveries. You can tell that the temperature is rising here on the west coast of Scotland by the increasing number of flowering plants spotted in the garden ... only a few weeks ago I was complaining about the lack of anything to cut. This pink/lilac azalea just came into bud recently so I imagined it would be quite a while before we'd see flowers. However, if I had checked back on photos taken last year I wouldn't have been so surprised when it suddenly burst into bloom last week ... here's the photo taken on 16 March 2014. 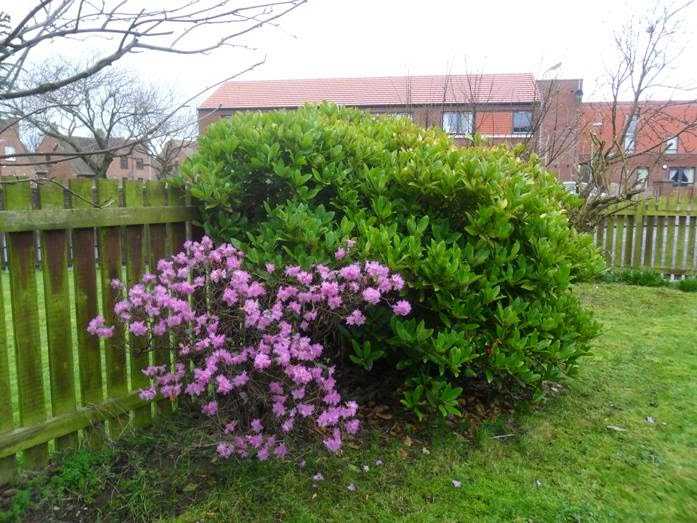 A lovely shrub inherited with the garden, as was the Barberry (berberis darwinii) that's been added to this week's vase. I did hesitate to add orange to the lilac but when the creamy hues of the two hellebore flowers (from the Gold Collection) were added this odd colour combination seemed to work just fine. 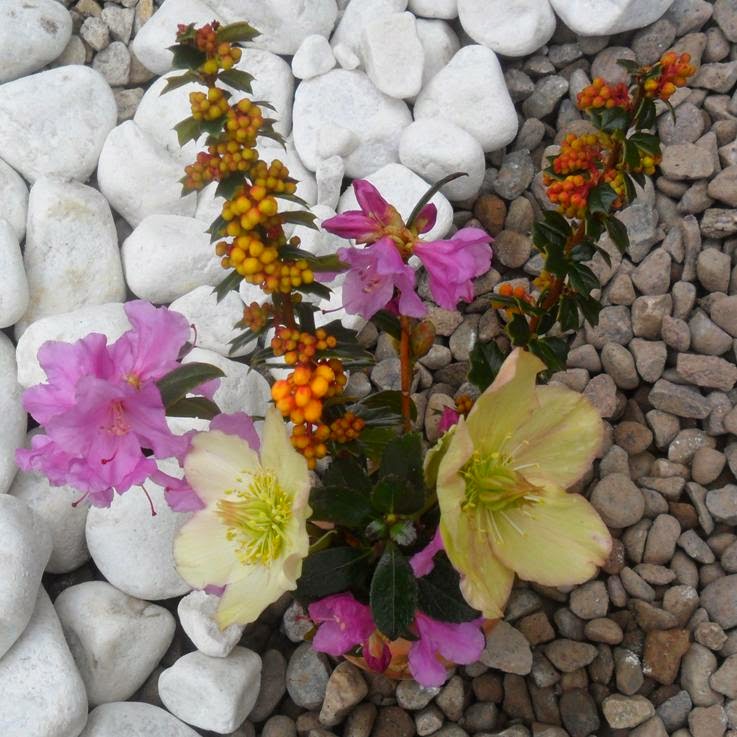 The Japanese Noritake vase used this week is yet another that has been released from the dim and dark depths of the corner cupboard. About time too! I've had it for about 25 years and this is the first time it has had flowers in it.

If you've only come for the vase you can skip the following garden update.

There are more signs that the temperature is rising. For example, these wild primroses flowering down under the shade of the cotoneaster. And even a supposedly summer flowering honeysuckle (Tellmanniana) is already in bud. 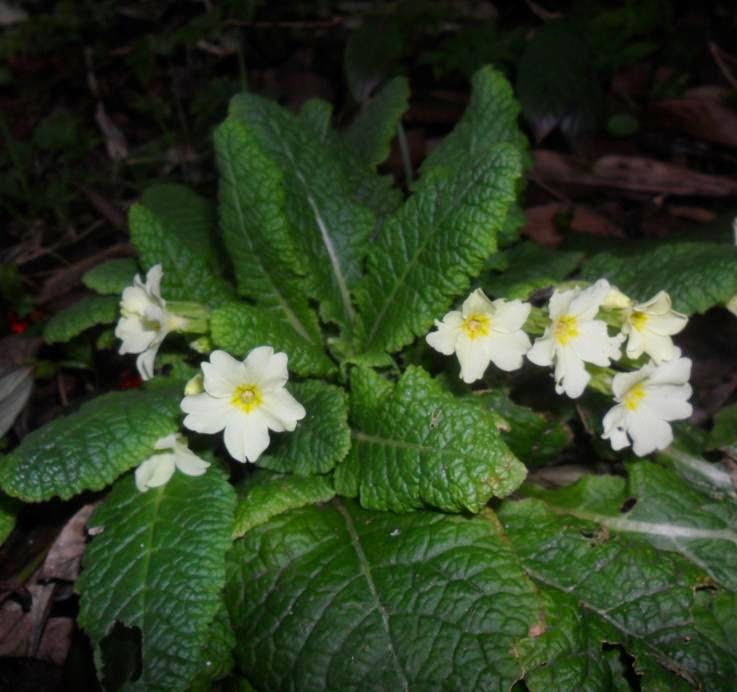 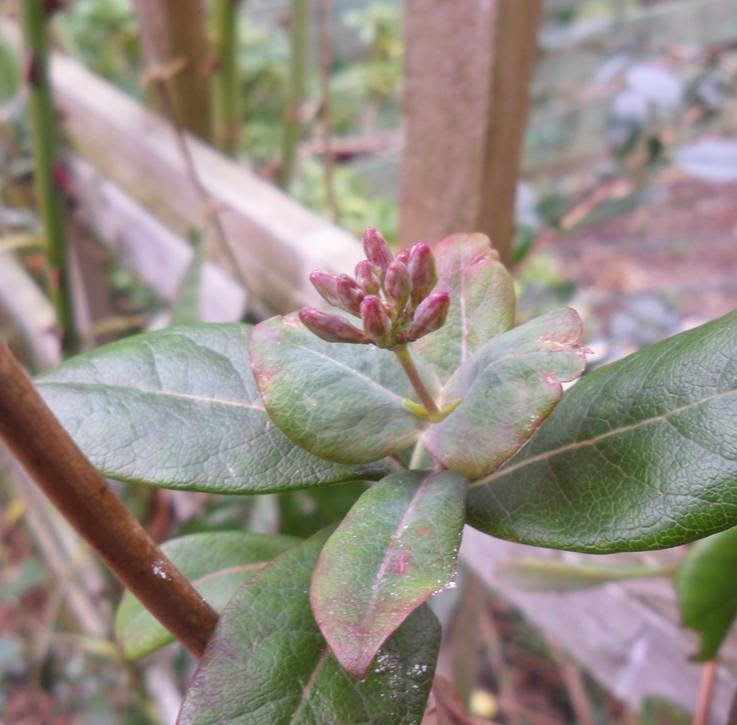 Without doubt there's a lot of fun to be derived from joining in with Cathy's meme, not least the everchanging vasefuls decorating our home every week ... my husband really appreciates the sight of fresh flowers everywhere. But there's also been an unexpected bonus ... some of the pickings, the ones that have a long vase life, have rooted in the water. This Skimmia from December last year, for example, grew strong roots so has now been potted up, and if it continues to do well we will have another lovely shrub for our garden. 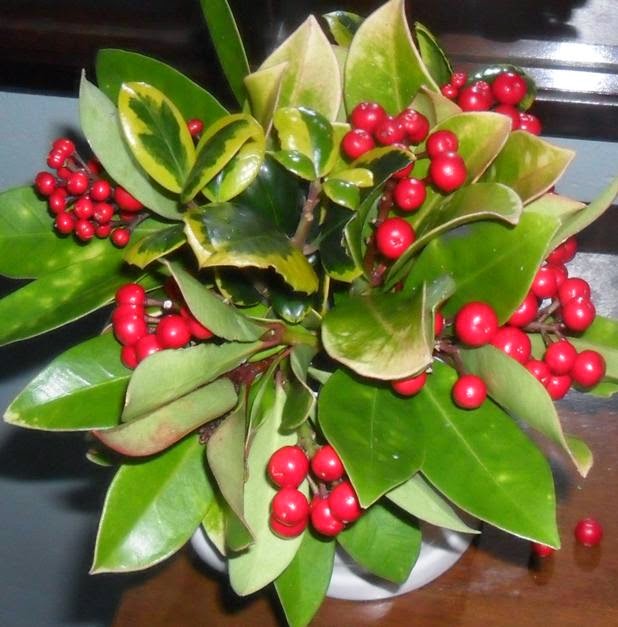 Ditto the ivy in this vase from November 2014. Once the rose died the ivy was left in the bud vase so long it rooted, so it has now been potted up too ... I have just the place for it should it thrive.

With no greenhouse these seedlings have to do the best they can on our bedroom windowsill. It's on the sunniest side of the house so they seem to be doing very nicely ... Canterbury Bells, Antirrhinum, Emilia Javonica, Didiscus, Agastache. Out of sight, further along the windowsill, but almost ready to pot up, are a few Lupin Snow Pixie seedlings - described as a wonderfully fragrant, charming annual with white flowers tipped with pink.

There's some Morning Glory (ipomea purpurea) seeds soaking overnight before sowing tomorrow ... they should look just right scrambling up the brick wall that divides the back garden from the front.

We've had a busy few days in the garden. Not that I've been doing much ... I've just been an onlooker while others have been doing the grafting. First, the old sycamore has been decapitated and then the very patchy strip of grass in the back was removed, weed suppressant laid, and covered with gravel. In fact, the new gravel bed was the location for photographing this week's vase. All I have to do now is find out what plants will do well in a gravel garden :)

I always love your "in a vase on Monday" choices, you make them look so attractive :o)
Jackie xx

So pretty I always love your Monday flowers. Looks like your well organised for spring into summer love and hugs Carole x

A lovely combination - and how good to be using vases and other treasures that have been tucked away ;)Lovely early azalea - and I haven't come across the Hellebore Gold collection so I shall look them up... Amazing to have your skimmia rooting like that :) Thanks for sharing