Good morning to you all. Yesterday passed in a whirl and Juli looked wonderful in her gown and hood. The procession of graduands were piped into the hall which made for a very moving scene. Here she is just after the ceremony: 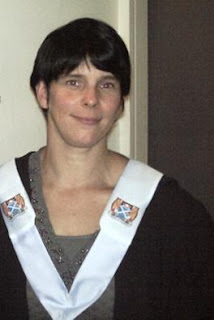 And here she is with her extremely proud mum and my DH, her ste﻿p-dad. 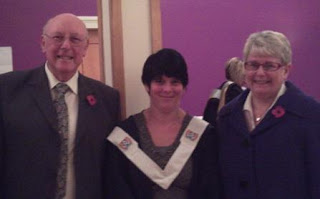 It was a very special occasion made all the more special because Juli is disabled - she has cerebral palsy and is profoundly deaf - and so this accomplishment is all the more hard won by her. So to Juli, HNDip Accounting, here's my tribute to you.

Juli was born with Rhesus Disease and was not expected to live more than a few hours. However, she was then, and still is, a real wee fighter. Growing up she tried everything and didn't let her disabilities get too much in the way. She very quickly learned to lip-read, long before her deafness was identified and when in her teens she learned sign language. At school she excelled in maths and art but struggled with anything associated with language. She also excelled at swimming and diving gaining numerous badges and a trophy or two on the way. She joined the Girl Guides and again excelled at collecting badges (I eventually sewed the badges together in strips so that when she outgrew her swimsuit or her Guide uniform I just had to sew one huge row of badges instead of all the individual ones!)

Unfortunately, because of her difficulties with language Juli left school without any qualifications. Soon after she met and married her husband, Graeme, and they have been together now for over 22 years and they have 5 children, ages ranging from 21 to 7 years. When she was in her twenties Juli had to have her jaw re-aligned - the spasms caused by the cerebral palsy had taken their toll and pulled her face out of line.

When her youngest child, Shari-Ann, was at the nursery school stage Juli decided to go to college and get some qualifications at last. With excellent assistance from the staff at Kilmarnock College and a sign language interpreter/note-taker she was able to study efficiently. However, in the first year she contracted glandular fever but somehow managed to complete the year. Then in the second year she had a mild stroke - she was only 37 at the time. It was discovered that she had a hole in her heart - apparently there from birth but undiagnosed until the stroke. Just before Christmas that year she had an operation to close the hole from which she recovered very quickly and we all breathed a sigh of relief!

By this time Juli had gained an HNC in Accounting and had gone on to obtain the HND as well. She then started on a degree course even though she was finding it even more challenging but 2 months ago she suffered another stroke, albeit another mild one, and was forced to put her plans on hold. She is now taking a year out to recover fully and get accustomed to the medication that she has to take for the rest of her life. And, she is also looking forward to becoming a grandmother for the first time - all this and she is still only 39 years old!

So, you see, I think my daughter is amazing and I am more than proud of her for her persistence and insistence, against a great many odds, to live a 'normal' life. She rocks:)

Signing off
Elizabeth
Posted by Elizabeth at 09:44

Elizabeth, how proud you must be of your daughter for her achievements. Your story brought tears to me, one setback after another piled on to her and your family and yet your Julie still had the determination to keep on picking herself up and getting on with it. She is amazing. Your story enthralled me, you should write the whole story from the beginning and get it into print as an inspiration to us all. Hugs Jenny

What a wonderfull story about your daughter. I have been reading it with admiration. Love from Holland , Christa.

Wow, what a truly inspirational story Elizabeth. Your daughter is astounding, what an amazingly strong woman she is. Many congratulations to her and to her proud parents and family. I wish her all the very best for the future xx

Elizabeth, What an inspiration. I admire you daughters will. Nice photos. She makes you proud and I imagine her children are extremely proud.

What a wonderful success story and what fantastic inspiration for others who suffer disabilites. No wonder you are so proud of your daughter :o)
Jackie xx

Elizabeth, what a wonderful story, your daughter is truely coruageous to have been through so much in her life... please pass on my congratulations to her..

You must be one proud mum!!]