Wednesday again! Another What's On Your Workdesk Wednesday over at Julia's Stamping Ground! And I'm still not into full crafting mode but there's been some progress, I've been pottering about in the craft room and - surprise, surprise - the desk is no longer as clear as it was last week. 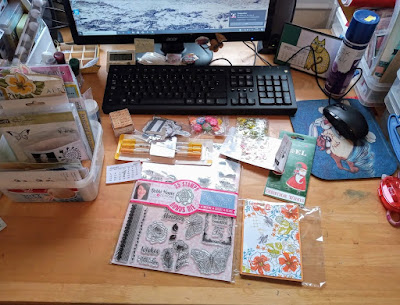 Nothing too exciting.  There's a clutter of bits and bobs, found in the wrong place, that need to be put away in the right place. There's stamps, both in the box and on the desk - the latter a Debbie Moore freebie that came with a magazine. I used the bee stamp in the set on the masterboard and the new blog header shared in my last post here. Since then, the masterboard has become the toppers on these cards. 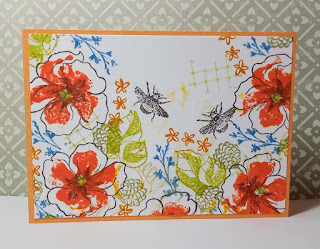 There's been a bit of action at the sewing machine - not much, but still some. 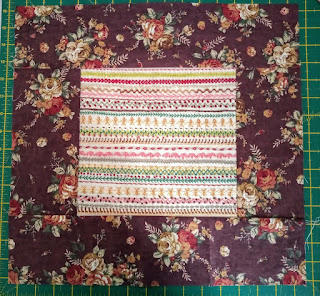 The embroidered panel in the middle was a sort of sampler that I've been working on for far too long. Really, it was just an excuse to try out new stitches and remind myself of those I was taught at school. Once finished, I decided to make a small cushion. It will be a constant remind of the hours spent stitching.

And now the book bit: 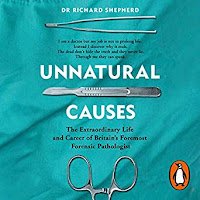 Dr Richard Shepherd is the UK's top forensic pathologist, having performed over 20,000 postmortems. In his autobiography, Unnatural Causes, he remembers the most high profile cases he worked on during the course of his career - cases like the Hungerford Massacre, the death of Princess Diana, the Clapham Rail Disaster, the London bombings of 2005 - to name a few. It's a fascinating memoir, a record of a remarkable career and, despite the gory bits, I really enjoyed listening to Dr Shepherd tell his story - he has a good narrator's voice.

That's it from me this week. I'm off now to see what Julia and our fellow deskers have been showing us today.

Take care everyone and have a great week ahead.

That Masterboard is brilliant, gorgeous cards and the book looks interesting too. Wishing you a happy crafty woyww, Angela x12x

I do love your sampler and am glad it will be part of something to remember... our cards look really pretty and I used to listen to stories while I crafted... Now I am trying to learn German! Not always the most relaxing thing to craft to... but having moved countries, it is essential!

Hi Elizabeth, the masterboard is lovely, made some fab cards. The sampler is very pretty, well done. Book sounds to be very interesting, may look for that one. Have a lovely week, Hugs, Shaz #6 X

Sounds a fascinating audio book, despite gore! Loving the cards from your masterboard, so pretty. Happy Woyww Helen #3

What lovely cards from that master board Elizabeth. The embroidered sampler on the cushion cover is beautiful. An interesting book this week. I have read the autobiography of Sir Sydney Smith who was a home office pathologist much earlier than that and that was fascinating too. Happy WOYWW. Sarah #2

Well the cards have turned out as beautifully as expected, what a glorious combination of colour you came up with.
I like your stitches sample r very much, a great idea to have it on hand all the time. Made me smile to read that you think you’ve been too long in the stitching. I’m just past three years and two thirds to go yet!! It will be an heirloom at this rate!!

I love bees and so I love your card - they are lovely bees aren't they? The bee features in my city coat of arms and is the emblem of Manchester. Adopted more so since the bombing at the MEN Arena and a focal point a couple of years ago when the city became home to a lot of bees all decorated by artists and individual charities. I wear a bee necklace and ear rings most of the time now to support my city.
Lovely masterboard and work from it and what a lot of lovely stitching on your panel which you have now used on a cushion - what a lovely idea. (I still have my WOYWW cushion on display in my craft room).
Hope you start to feel much better as this week progresses and can return to full on crafting Elizabeth style. In the meantime keep reading and resting.
Hugs, Neet 1 xx

I'm late , I'm late for a very important date.....sorry but I've made 5 Memory bears in last two days plus other urgent sewing jobs too and of course my customers must come first :-). I guess it's better late than never eh?
I used to love using my sewing machine in rows like that and think Jo still has some coasters I made her using it from many years ago now.
Hugs,
Annie x #10

Your little stitched sample is gorgeous - just what I love. It would look lovely in the centre of a cushion or even just a framed panel as a picture. xx Jo