It's been quite a while since I last posted. I wish I could say I'd been doing something really exciting - touring the Highlands or climbing Ben Nevis, for example - but sadly not. Instead, I can only blame life - it just got in the way.  And it's been difficult to find time to make cards but I did squeeze in a few hours today, so here's what I've managed to make for the Christmas Card Club challenge. Today the theme, chosen by Shaz, is 'penguins or polar bears'. As you can see I opted for penguins. 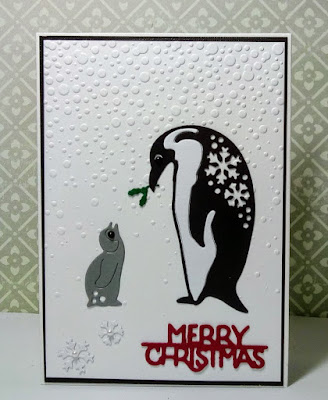 The penguin chick is too cute and looks disappointed to be offered holly leaves instead of fish, don't you think?

- a white A6 card base
- cardstock: white for embossed layer and penguin; black for layering and penguin; grey for baby penguin chick; red for greeting
- embellishments: tiny black and white pearls from Craft for Occasions

After watching the first episode of 'Seven Worlds, One Planet' on TV last night, I have renewed respect for these brave creatures so was delighted to bring out this cute penguin die set today.

There's only three more challenges for the Christmas Card Club left in this year and I'm pleased to say I have, by now, built up quite a stock of cards. It's been well worth participating in the challenge along with the others this year. I hope you will pop over to see what my teammates have created for today's theme. You'll find a list of their names and links on my right sidebar - as always they are so much more creative than me.

Cute penguin and offspring Elizabeth. Life doe get in the way sometimes and you just have to go with the flow. Hope things have settled down now. Christine x

Hi Elizabeth, what a wonderful card, lovely penguins, and love the embossed background.
I watched the programme too and like you I was amazed by the harsh life these creatures have to endure. It's a marvellous wildlife documentary,brilliant photography too. Kate x x

This is a gorgeous card with beautiful snowy embossing which adds to the frosty feel. I recorded the first episode and haven't seen it yet, so looking forward to it.
Lorraine

Such a lovely penguin card, the image is so cute