What's On Your Workdesk Wednesday - Week 528

Wednesday again - amazing how it turns up earlier every week! - so, of course, I'm joining in with WOYWW over at Julia's Stamping Ground again. It's a weekly treat I really don't like to miss. 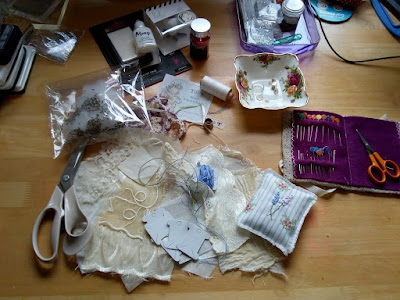 And, as usual, it's a bit of a mess. I joined Tilly Rose for her 'Secret Stitch-a-Long yesterday evening and everything is still where I left it at nine o'clock when I went of to watch the drama on television. That pile of fabric scraps, laces and ribbons are all vintage - all strokably pretty stuff. The sewing interrupted another project and that explains the stuff shoved to the back - stamps, embossing powder, etc. It's just as well I have a lovely big desk - it's probably the EM's best bargain find ever! 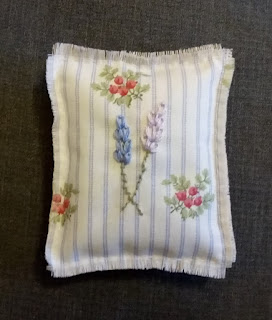 The lavender bag not quite finished. It's all sewn by hand, including the embroidered lavender flowers. The fabric is vintage Laura Ashley - from 1988. I'm thinking I'll add a few tiny pearls and maybe a bit of lace before I call it done. 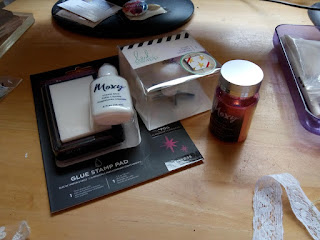 Some new goodies that I need to find time to play with. It's a glue stamp pad, a star shaped stamp and some extra fine pink glitter. Seems the glue pad can be used with the stamp to add glitter, chalk, foil or embossing powder to a project - very versatile. I'll share the results when I get around to trying it out. 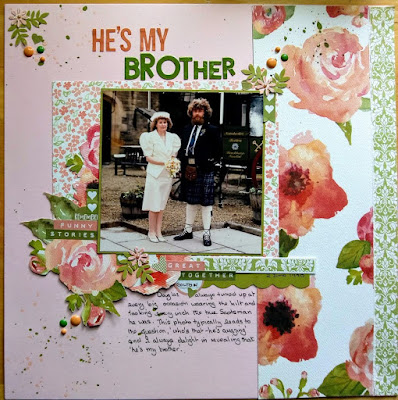 I did finally finish the layout that I was working on last Wednesday. The photo is of me and my late brother, Douglas, in full highland dress which he wore to every important occasion. With his unruly mop of curly hair and equally shaggy beard he was guaranteed to be a talking point and I got used to being asked who's the amazing highlander. I always enjoyed telling them that he was my brother. Can't think why that surprised so many - we were so alike!

And now the book bit. This week it's the complete Cormoran Strike crime series - you can tell I've been spending a lot of time in the garden. 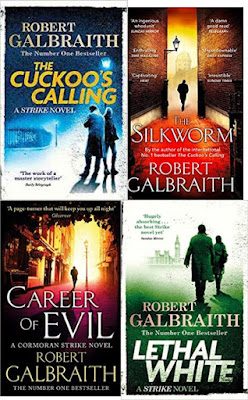 All published under the pseudonym Robert Galbraith but written by J K Rowling, she of Harry Potter fame, the series is about Cormoran Strike, private detective, and his able assistant, Robin. I have to admit to enjoying binging on the series - I love a good whodunnit with plenty of clues to work on. Strike, though gruff and a bit tetchy, is a likable character, as is his very competent assistant, Robin, and the two together make an effective crime solving team. The scrapes they get  into, both in their personal life and whilst sleuthing, kept me entertained right to the end of the fourth book. Only four novels in the series have so far been published but the author plans at least another ten. Three have been adapted as a television series for BBC One. I can't wait to read the fifth as soon as it's made available as an audiobook.


It's just started to rain here - that's nature having a laugh of me for spending two hours watering the whole garden yesterday - so looks like I'll have to stay in and check out what's on your workdesks. Isn't it kind of the the weather to be so obliging! :)

Have a great day and a fabulous week ahead.

the lavender bag is looking gorgeous. Great to see the finished layout of you and your brother. Helen #6

Now that gives me an idea Lol! I picked up some Lavender while I was at Doncaster so little bags like that would be great. I keep lavender around my antique Teddy Bears as moths and carpet beetles don't like the smell and as the bears are made of Mohair they are always at risk of being nibbled. Wishing you a lovely creative week and a happy woyww, Angela x13x

A lovely LO - how lucky you are to have had such a great "highlander" brother!
Your hand sewing is really pretty and the pearls etc will just finish it off nicely. xx Jo

Love the photo of you and Douglas, he looks like a Highland Hagrid! A really great LO. Your lavender bag is so pretty, love the embroidery and I think a few pearls will be the perfect finishing touch. I enjoyed watching Strike on TV, but have never read the books.
Hugs LLJ 5 xx

Elizabath, Thank you for you earier visit to my blog. Goog looking desk and love the lavender bag. What a lovely page with you and your brother,

I love the lavender bag but thinking of 1988 as being vintage caught me by surprise! Great page of you and your brother! Thanks for popping by and have a great week!
Carol N #25

I love your little vintage bits, such gorgeous pieces to play with, and the lavender bag is so pretty - a great idea, I really should make some this year instead of spending so much money on moth repellent products that don't seem to work anyway!
A lovely layout of you and your brother, and such a nice way to remember happy times.
Hope you have a good week,
Diana x #18

Love the finished layout Elizabeth! Look forward to hearing how well the glue pad works for adding glitter to stamped images. I may just have to try those books, I hadn't realised that they were written by JK Rowling. Happy WOYWW. Sarah #2

Hi Elizabeth, hope the Glue Pad works for you, I have to say I've never yet found one that actually does work very well, and I've bought a few! Look forward to hearing how you get on with it. Have a lovely week, Hugs, Shaz #16 X

A pretty lavender bag that reminds me so much of the lovely things you make. Takes me back to all the crops you and I have attended when you always include some of your lovely work..
Love the photo of you and your late brother, he certainly looks like the highland Laddie we all associate with your wonderful birthplace.
Look forward to seeing what you make in the Tilly Rose project - will we see it soon?
Hugs, Neet xx 1
ps the book reviews have got me thinking .... might have to be looked into

How interesting that Robert Galbraith is JK Rowling! I never knew that! I will have to read those books!
Your scrapbook page looks awesome! I have a nephew with flaming red hair that looks just like your brother, and wears highland dress as well! I look forward to your report on the glue pad, I have never heard of it before, and I think your sweet lavender bag will look great with those additions! Thank you for your visit, and have a wonderful week! Lindart #31

Gorgeous layout and the lavender bag is really pretty! Have a great week. With love & God Bless, Caro x (#14)

Hi Elizabeth, I had a bit of a giggle at 1988 being vintage! The fabric is lovely. Hope the glue pad works, I haven't tried one, but anything that makes gluing easier is a bonus! Great pic of you and your brother. Have a lovely week Heather xx #11

HI Elizabeth, I am curious to know what you think of the glue pad after you play with it. ( I have bought many brands of them over the years but, not that one and the ones I bought were a waste of money to put it nicely) ooh I love the shot of you and your brother :) that is a fun story too. ~Stacy #30

Hello Elizabeth . It is absolutely bucketing it down here so stuck inside for the duration. I might even get my card made early for the CCC on Sunday. The glue pad sounds interesting. Not seen one of those as yet. Hugs Mrs A.

I love your little lavender bag, because my Mom used to embroider all the time. Happy belated WOYWW!

Beautiful Vintage bits Elizabeth so nice to be crafting along with Tilly Rose. She was at the last Craft show I attended where she had a stitch & natter event going on but I was not there long enough to take part. Beautiful make, I love lavender bags and make them myself using my own Lavender if it dries well.
Hope you have sunshine this weekend, we have had a day of rain & I believe Saturday we will be graced with it again, the garden will be very happy.
Happy belated WoywW Tracey #8
P.S Loved seeing your magnificent Brothers picture, What a fine man he looked, what a proud Sis you were xx

Love the lavender bag, Elizabeth! Exquisite. I made a lot for my fellow patients on the chemo unit several years ago and they loved them. They never go out of fashion! How great to read your book review. I couldn't believe what I was reading - at this very moment I'm listening to the first Cormoran Strike book (The Cuckoo's Calling) as an audio book - having leapt in a few months ago with Lethal White! I really enjoy these books. I did a bit of a double take when I realised that Robert Galbraith was really J.K. Rowling as I am definitely NOT a fan of Harry Potter, but so far there is no sign of any occult stuff in the Strike books.

Thank you for your visit, and I agree with you about the amazing fact that bumble bees can actually fly, despite being apparently unaerodynamic! My little birds haven't taken flight yet, but one of them might be about to - being separated from his pals and attached to a birthday card!

Glad you enjoyed seeing the kitties, too.