One of the many crafting websites I pop over to regularly is Shimelle Laine's Pretty Paper, True Stories where it's possible to find lots of inspirational posts covering a wide variety of techniques. A recent post by Gretchen McElveen is on making flowers. I couldn't resist trying this out for myself and thought you might like to give it a try too. 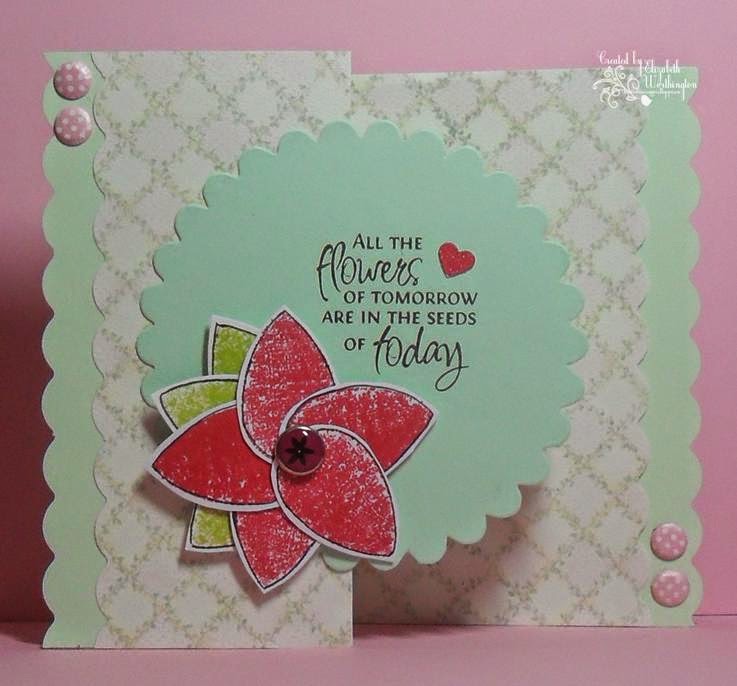 Here's the flower and here's how it was made. 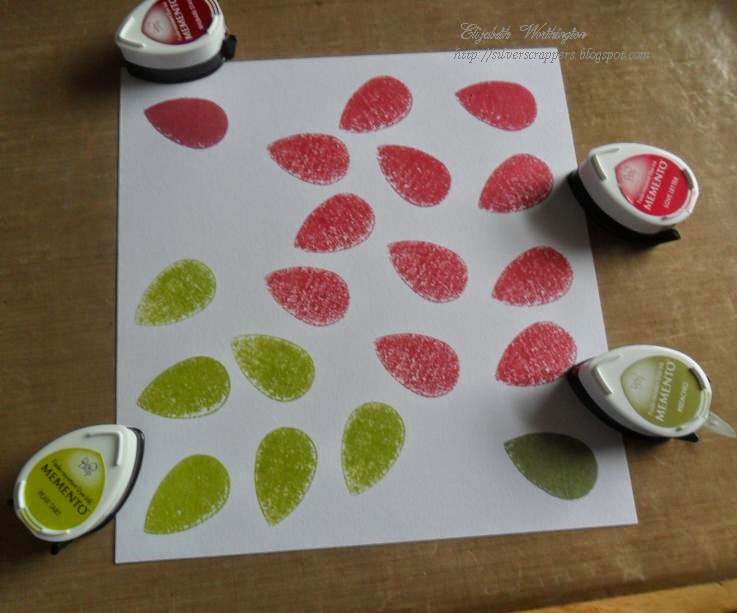 Step 1: It's simple enough. Take a couple of the small shaped ink pads, Gretchen used Colorbox Cat's Eye pads, I used Memento Dewdrops pads - the colours are Love Letter and Pear Tart - and some white cardstock. Stamp the ink pads all over the card. It's stating the obvious I know but the red shapes are for the 'petals', and the green for the 'leaves'. I did try a couple of deeper colours, Rhubarb Stalk and Pistachio - you can see one of each in two of the corners - but preferred the lighter colours. 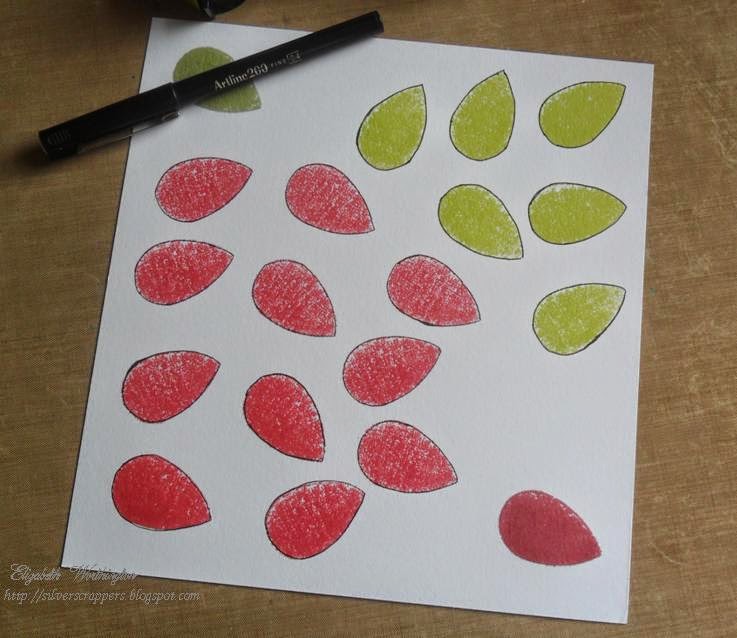 Step 2: Outline each shape using a black fine line pen - the one I have is an Artline 200 Fine 0.4. You don't have to be too exact ... this is just as well because I can hardly draw a straight line to save myself :) 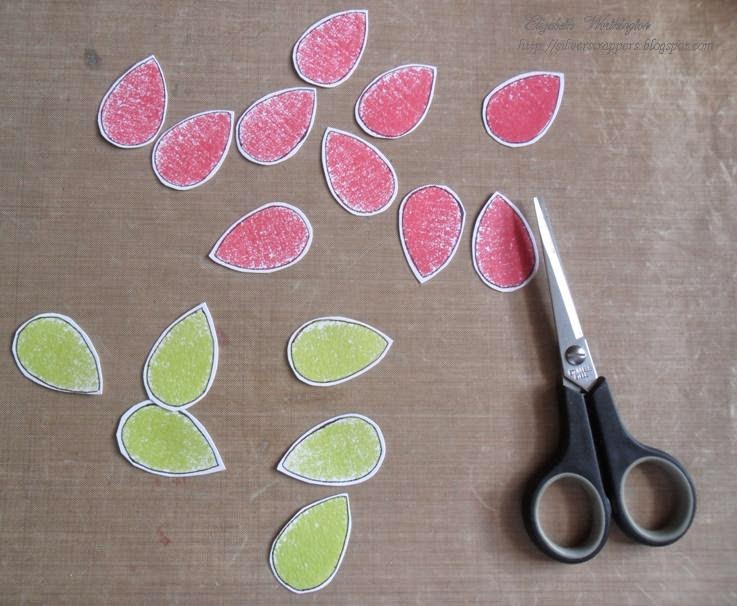 Step 3: Cut the shapes out leaving a narrow margin of white round each shape ... again you don't need to be precise. 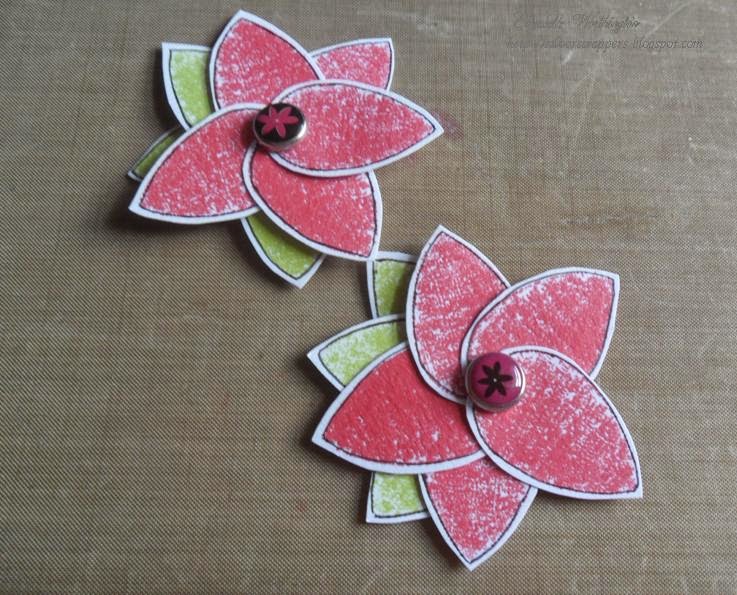 Step 4: Pierce each shape at what will be the base of the 'petal'/'leaf' with a pokey tool. Next, arrange five 'petals' to form a flower shape and then place two or three of the 'leaves' behind. Finally, push a brad through the pierced holes and fasten at the back. End result: a fabulous flower embellishment that can be used on any project. 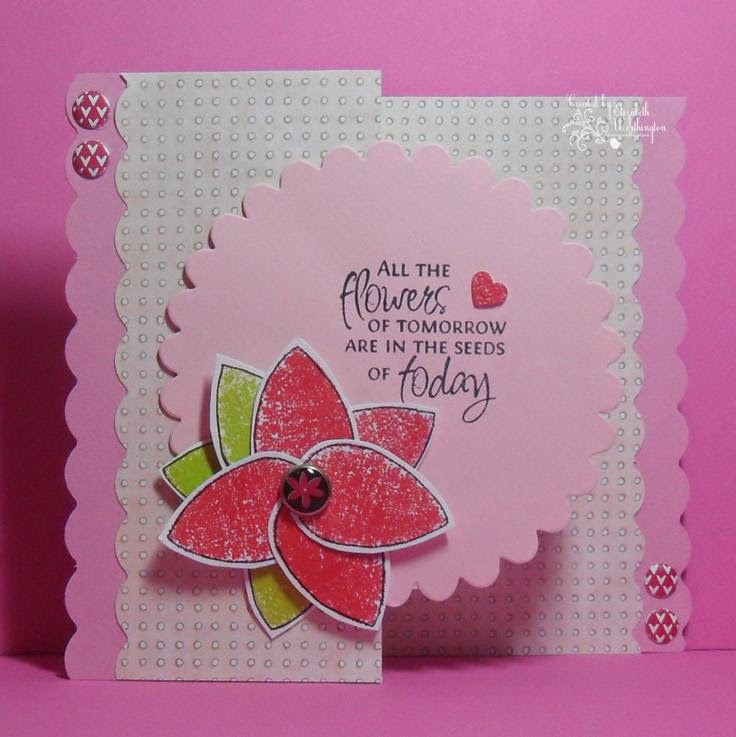 I've used the two flowers I made to decorate two cards but they could just as easily be used to embellish any project that calls for flowers.

The cards were made using white die-cut card bases, plain green or pink cardstock and some leftover scraps of patterned paper, trimmed with a scalloped edge punch. The toppers are die-cut scalloped edge circles (bought from e-bay back in the days before I had a die-cutting machine) stamped with the sentiment and embellished with the flowers and tiny hearts punched from a snippet of card inked with the red ink pad. The final embellishment is the card candy.

Because of those tiny snippets and the leftover scraps of patterned paper I'm submitting both card to:

And that is all for today : ) Rather later than I intended but I've been busy sorting out stuff in the garden. I only meant to be out there for an hour or so but it was such a lovely sunny day that I got quite absorbed and lost track of time.

Hope you had as good a day too.

It's the simple things like making this flower that I find fun to do! Your card is so summery and pretty with those sugar-coated colors!

Hello Elizabeth, wow this is just gorgeous what a fab idea to make flowers from these stamp pads which I too have...love your blog and creations...must check out your creation below....have also joined as a new follower of your blog....
♥aNNie The Journey is the Start

Hello Elizabeth what a stunning card, gorgeous colours and design.
Thanks for your little tutorial, a fab simple way to make flowers, Kate x

This is such a great idea. I like your pretty card and love this idea for snippets!

Very innovative use of the inkpads and two beautiful cards :o)
Jackie xx

Brilliant card and what a super technique Elizabeth! One for show and tell for sure :)

Hi Elizabeth, beautiful card and so brilliant the flowers. Thank you for sharing this with us. I really don't understand how I could miss you, you are one of my followers (thank you so much for that since I am still building up) but I haven't had contact with you yet. I am so sorry for this Elizabeth. I have become your follower too and I promise I will make it up to you in the future. Have a nice day, greetings from Veerle x

Well, would you look at that! I wish I had seen this "how to" before I spent all that money on those flower and leaf dies! This is such a brilliant idea and so easy to do. Thank you for sharing, Elizabeth! Congratulations on the well-deserved showcase at Pixie's!! Hugs, Darnell