Wednesday and a chance to go peer at other folks creative spaces because Julia at Stamping Ground makes it all possible - click the WOYWW icon on the left to join in the fun. 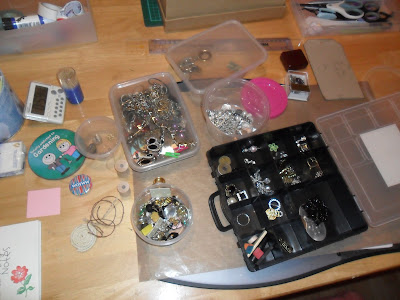 Notice the WOYWW badge Julia was kind and generous enough to send me - love it and will wear it with pride at the next craft show I go to :))

As you can see, I'm having a sort out of all the wee bits and pieces of charms, baubles and gee-gaws that have collected in all manner of containers. The EM found this handy box at one of the pound shops and it is perfect for the purpose. You can also see a timer, some cocktail sticks, some bits of twine, pocket tissues, another one of my decorated notebooks, this time for scrapbook notes, and that vital piece of equipment that no desk should be without, a coaster. At the back my tray for the tools of the trade is now two - one for adhesives of all descriptions and the other for scissors and everything else that I have to have handy.

Someone, sorry but I forget who, pointed out that I now have two desks to show each week! Here's the other: 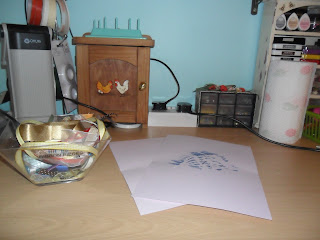 Not a lot to see on this one - just the usual except for a dish full of snippets of ribbon and something hidden under some used copy paper. All will be revealed on Thursday.

Many thanks to all who have sent their good wishes to my grandchildren, Alun & Shari-Ann and great-granddaughter, Rhian, who are quite poorly at the moment. And for those of you who commented on my granddaughter, Jenny, not being allowed to buy Calpol from the chemist in Asda - story told in yesterday's post - many thanks too, it's good to know I'm not the only one who thinks that it's ridiculous. As Jenny says, if she is old enough to vote, old enough to join the army and be sent to fight in Afghanistan, and old enough to be a mother, then surely she is old enough to purchase medication for her baby.

And that's it for today because it's D for Dentist Day today, and it's the horrid root canal job. I have an appointment for 10.30am and I'm told that it will take approximately one hour ... it's safe to say I'm dreading this - it's being injected into my gums that bothers me most, hate the needle :(

If I'm feeling up to it I'll be visiting as many of you as I can later today. In the meantime, wish me luck folks, I am trying to be brave, honest :))

Happy WOYWW to you all,

poor you, hope the dentist goes ok. I agree about the calpol, ridiculous, hope the invalids improve quickly.

Arghhhhh that sounds unpleasant to say the least. Hope all goes well for you today and the rest of you family make a good speedy recovery.
Hugs,
A x
ps I've acheived my aim and managed to get both babies down for a nap so I'm managing a bit of blog hopping :-)

Blogger is playing up and not posting my comments, so here goes a second time.
Your desk looks quite tidy, it's interesting what you find when you sort out your bits and pieces.
Hope everything went well at the dentist's. I've been putting off going too, LOL.
Sandy

Oooh hope it all goes well at the Dentist. Fab desk tidy going on, love all your bits and bobs. Thanks for sharing this WOYWW, let the snooping commence! Take care Zo xx 22

Love your little trinkets and the storage boxes. I have spent hours sorting my sequins and buttons into little coloured piles...keeps me out of trouble!
Sophie no.88

Lovely desk's.. I hope all went well at the dreaded dentist, I too dont like needles in my mouth that the worse part for me also... I say to myself as I enter the room its only for a few seconds .. only a few seconds.. I repeat this over & over.. it works for me, take it easy when you return home Big Hugs May x x x No9

Trousers all done - and I'm a happy bunny back in my craft room :) Hope the dentist went well Elizabeth. Your sorting out looks great - I love those compartmented boxes for twiddly bits too!

Good luck at the dentist. I have an appointment tomorrow - just for a cleaning; hope it doesn't lead to something else!

Looks like you are busy organising there, Elizabeth.
I feel for you with the dentist, I hope it went well and you are now being pampered and taking it easy. It always take me by surprise how having your teeth worked on makes you feel so drained.
I was gobsmacked at the Calpol saga, that's awful. I hope all babies start to feel better very soon.
Take care
Hugs Lisax

Hope you are okay after the dentist! How utterly ridiculous about the Calpol - honestly, I do think we go too far with these things sometimes. #77

Wednesday’s sure do come around quick! Trying again to make “All” the rounds. Have a great day!

Oh Elizabeth - hope the dental treatment has gone smoothly and you're ok. Root canal work is not funny :(
Sorting is good for the soul, that little Poundland case was a bargain, eh!!
Hugs, LLJ #68 xx

Oh Elizabeth, hope you are feeling better now that the ordeal is over...love all your bits and bobs. You are a tease not showing what is under that paper though... Regards, Anne #66

Good luck with the root canal. Hope the next week will be much Lizzy

Hope all went well at the dentist - take it easy for a day or so. x jo

Oops I managed to fuse together your Mother's Day post and WOYWW. I'll look forward to seeing what's under the scrap paper. Good luck with the Dentist. I've got my next root canal appointment next week. :-( Not looking forward to it.
Ros. #40

Hi Elizabeth
Just read your comment on my blog about the retreat. So sorry you won't be able to make it in September. I hope your hubby will be alright.
Perhaps see you next year at the March one.
Siobhan x

It is fun sorting out sometimes, nearly as good as making. hope the dentist goes well
janet #13

Good luck at the dental appointment! I never understood laws that said you were legally an adult at 18, could join the armed forces and yet there were still things you are unable to do. Doesn't make a darn bit of sense to me! Loved the peek at your workdesk and a happy WOYWW to you! Warmly, Tracy

I'm a day late, so I hoipe yesterdays hour at the Dentist went OK...and to late this time, but you can ask him to numb your gum with a pad of something chemical - they just don't advertise it! Hope you're comfortable this morning. I can work out everything on your desk but the little blue bottle next to the timer.I have the ubiquitous coaster too - but naturally, it's not as polite as yours...mine says 'will show knickers for chocolate'. Untested, but quite possibly true!!

I'm a bit late this week - only got to the mid-50s yesterday and doing my best to catch up so I hope all went well at the dentist's.

The box is a bargain and ideal for all your bits and pieces. Only one complaint - everyone is getting their WOYWW badge -except me boo hoo.

Lol to Julia, trust her, tee hee!! I don't have a coaster on my desk but really should have one. It was me who mentioned the two desks, so I'm glad you're showing us both! Can't believe the stupid chemist in Asda, what a crazy rule, hope everyone is on the mend! And I'm late enough to see the beautiful tag you posted today for Handy Hippo, really beautiful.

hope that your visit to the dentist went well yesterday,thanks for sharing your desks :)
#51

Lovely desk shots and what a lot of little bits you have in your new box. Hope the dentist visit was ok'ish - can't say ok as it couldn't have been with what you were having done - why were we not all born with a set of dentures?
Hugs, Neet #4 xx

I cannot believe that problem your poor granddaughter had with the Calpol. That is totally ridiculous and unfair to the poor children. I hope your dental visit has gone well. I shall be on the same course in a couple of weeks, ready for a new crown - lovely. Thank you for your visit and comment on my moonscape. It is good when something takes over and leads you to develop. xx Maggie

Forgot to say thanks for your lovely comments about our new stamp and talented daughter. xx Maggie #4

What a fun lot of bits to sort through, Elizabeth!

PS, I'm with you on the needle in the gum thing, UGH!!! Hope it all went well for you!

I like all your gee gaws in the container. Hope all goes well with the dreaded dentist appointment.

You have a lovely blog. Is there a subscribe link for those of us who are WordPress folk?

Hi Elizabeth, there's no need to apologise for your late visit to my desk this week - because as you can see, I'm even later!! lol (better late than never as they say :) )

I like your new box - looks as though you've had a good sort out there of your bits and pieces. I'm looking for a box to hold all my jewellery making bits and pieces - I haven't actually made any proper jewellery yet, but have accumulated quite a collection of stuff - you know how it is!

I hope your visit to the dentist went well - never a nice experience. Have a lovely rest of the weekend now xx

Oh Elizabeth, you have my sympathy, having to go to the dentist and having that done... I do hope it went well.

Love all the charms and things on your table! Another one sorting things out... You think 2 yrs is enough time for me to get sorted? I think I need all the WOYWW-ers to come and help me out if i'm going to do it all in time lol!!!

Thanks for your comment on my blog. Hop over again if you get time, and see what I'm up to now!! I'm having such fun with it!

I'm running late as usual with WOYWW - there are so many now that I never get through them all, especially when Blogger is misbehaving!

agh! I'm sooooo late,been away so I have a note! I hate the denist so I ope all went well, I have something 'tooth' wise coming up as soon as I can afford it! Happy VERY late last weeks woyww
(Lyn)