It's Christmas Eve ... we've had an unexpected delivery ... a baby great-niece!

Yes, my great-niece, Arianna, decided to make an unscheduled arrival. She wasn't expected until the 19th January. but clearly didn't want to miss all the fun of Christmas. I thought I had a couple of weeks yet to make this little gift for her. 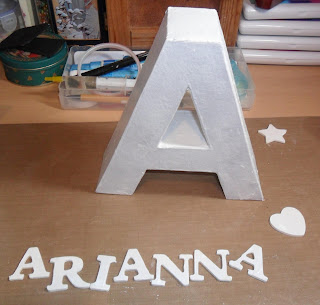 Arianna arrived at 7.22am today, 24th December, weighing in at 6lbs 6oz. This is my niece's, Louise, first baby and, as Louise has been insulin dependent since she was a little girl, Arianna is something of a little miracle. Unfortunately, it doesn't look as though mother and baby will be home for Christmas Day - Louise's diabetes has to be treated and Arianna's blood count is giving cause for concern ... hopefully they will both do well and get home soon - we can't wait to visit. Margaret, my sister and Louise's mum, is just thrilled to bits with Arianna, her first grandchild - telling me she is so little :)

I've not decided exactly how I'm going to decorate this papier mache letter A - I think it will just evolve as I go along - but I've given it two coats of white gesso to start with. The baby's nursery  is decorated with Tatty Ted so the colours I have to work with are white, grey, pink and blue.  The letters are made of wood so I've given them a couple of coats of gesso too - and I'm not sure how I'm going to place all the letters on the capital A - I'll have to think about it :)

I don't know about you, but I've been on the go all day - the morning was spent doing housework ... I know, the dreaded word, but it had to be done ... and the afternoon was given over to baking. 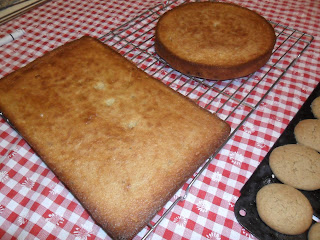 Trifle sponge - all ready for putting all the ingredients together tomorrow morning.  I'm making Nigel Slater's version this year ... it has no jelly, but has custard, lemon curd, double cream and topped with pistachio nuts. Nigel used cape gooseberries to decorate too but I couldn't find them in the shops so will be using raspberries instead. 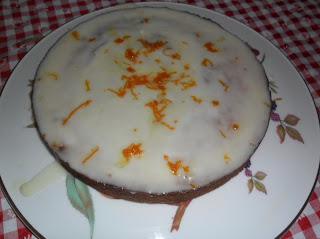 Orange mincemeat cake - made with leftover trifle mixture which has mincemeat included in the ingredients. 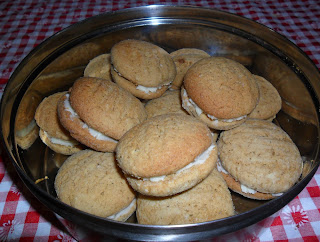 Coffee Kisses - these were so popular with my children when they were young but it's years since I made them.

That's us ready for any visitors, expected or otherwise ... the EM thinks I could feed the five thousand with the food I've got in, but after the last few years, when I wasn't really well enough to do much in the way of Christmas preparations, it makes a nice change to be able to do it this year. However, I think I need a week off now!!

We usually stay up late on Christmas Eve, waiting until the clock strikes twelve, then open one present each before going to bed ... we're never tempted to open every package because we enjoy the anticipation ... like a couple of big kids really :))

I think it is highly unlike I'll be on-line tomorrow so I'll leave you with this message:


MERRY CHRISTMAS
TO EACH AND EVERYONE
OF YOU AND
HAVE A WONDERFUL DAY!

oh how fabulous Elizabeth! You must be soooo thrilled! I just know you'll all going to have a very Merry Christmas!! Thank you for all your visits and kind comments and for 'checking' my spelling!!! Glad tidings!
((Lyn))

What a wonderful surprise - hope mother and baby do well and get home soon. Your baking looks fabulous especially the mincemeat cake - would love to get the recipe from you. Hope you all have had a wonderful Christmas and Best Wishes for 2012.

Awesome post Elizabeth, with all its news and fun!! have put your candy on my WOYWW as it is all over my desk and soooo loving it - great playing time! will pop back for WOYWW and exciting about the new bub and trust all are keeping well! love Shaz in Oz.x