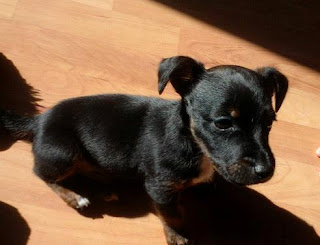 Mac, my SIL's little Jack Russell died just two days after his best friend, Gordon. Despite having all his inoculations, Mac developed kennel cough recently. The vet prescribed medication but Mac got increasingly ill, so much so that he wouldn't eat or drink. He was found to have an enlarged heart and fluid on his lungs. He had to be put on a drip and for a while it was touch and go, but he rallied and was allowed home. However, because of his heart condition the family were told that he would be on medication for the rest of his life. Sadly, his life proved to be a short one - only two weeks later, on December 1st, Mac's little heart gave out altogether.

He was such a bright, cheerful, biddable wee dog ... though he could be a bit nippy when he became over-excited. He loved to run around and play football and quite obviously enjoyed life to the full. We are all shocked at the loss, especially coming so soon after the loss of Gordon.

I'd like to give thanks for the thoughtful and comforting messages received from all you kind and caring people ... they are truly appreciated. Gordon's funeral was a moving experience - many who attended were, as Gordon himself was, deaf so it was a silent service, there were no hymns sung, and there was a sign language interpreter. The eulogy from the minister was a fitting tribute to a lovely man.

Life goes on for us all, but I did have to take a day or so off from the blogging just to take it all in and come to terms with losing these two dear souls. I'm sure you all understand that I needed some time out. I will be back soon.

Take care, all of you,

Email ThisBlogThis!Share to TwitterShare to FacebookShare to Pinterest
Labels: Personal

Oh Elizabeth, how sad and straight after Gordon. Your SIL must feel like a punch bag right now. Mac looked such a cutie and must have been a real delight. Then, I had a few snuffles over Gordon's funeral service - a beautifully written post and a tribute to both Gordon and little Mac. Hope to see you on the up very soon. Love, Di xx